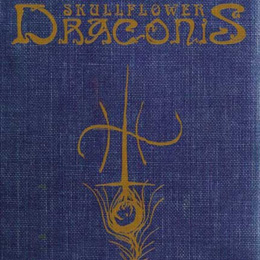 Skullflower are one of the outfits created by Matthew Bower, whom you might know from the likes of Pure, Total, Sunroof!, Voltigeurs etc. With the latter, he joins co-operation with Samantha Davies, who’s part of Skullflower’s line-up nowadays. Matthew started this project in 1987 (!) under the Broken Flag banner (which was run by Ramleh’s Gary Mundy, who was part of the (session) line-up of Skullflower in the past), a collective of experimental Industrial / Noise / Rock artists from the United Kingdom (think e.g. Ramleh, Total or Whitehouse etc.). The first official release was done in 1988 (an EP called Birthdeath, by the way), followed by lots of other releases via different labels, yet especially via Dirter Promotions and Crucial Blast.

Draconis is not their first release via Cold Spring Records (one of the most essential labels when it comes to Industrial / Noise / Drone, and this since quite a long time; Archon Satani / Inanna, Melek-Tha etc. aren’t but some projects that released some of the best Industrial-albums in the nineties, to my modest opinion). The album turns out to be a double-one (forty six and forty minutes in totality), which makes the trip even more bizarre and psychedelic.

Anyway, the first disc of Draconis brings a mixture of minimal noise-scapes, tribal elements (with inclusion, though extremely malformed, of their common string-parts) and psychedelic details, creating a transcendental, mesmerizing and trippy atmosphere, creating a new definition on Minimal Industrial/ Noise/ Drone for being both creative and nihilistic at the same time. Never before, this project was so intensively primal in execution, and Bower’s passion for mythological themes has never sound so enigmatic and profound before, though lacking of any modernistic gadget to strengthen that interest. Especially through compositions like To Raise Wolves, the idea of super-natural and semi-divine grotesquery gets translated the sonic way, and Skullflower do it the most perfect way.

Disc two is much more aggressive, violently raping your grey cells. The putrid noise and minimal sonic-industrialisation of minimal/ mechanical sounds have been executed much more fiercely and uncompromising at the one hand (cf. compositions like Autumns Trinkets), but a track like Sunset Dreams… well, the title says it all. It’s a dreamy sunny-beach lullaby … No, just kidding. Evidently such creations maintain the nihilistic and minimal oppressive heaviness of the first disc, yet it’s rather mesmerizing and multi-dimensional (don’t ask me why, but I’d rather call it post-dimensional; does this Music infect my brain???). Also Dresden Spires breathes that poisonous flair of esoteric unease, but with Dakshinikalika, Skullflower brings probably (one of) the most mystic creations ever done.

Anyway, this might be the most beautiful cacophony from this decade. …hard, very hard to digest, but with a strong stomach you might adore this material. I, for myself, truly prefer disc two…