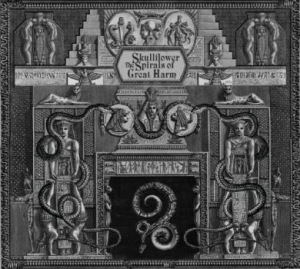 To celebrate their 30th (!!!) anniversary (indeed thirty years of raison d’être), Skullflower (finally) release the Cold Spring-successor of the magisterial album Draconis. The latter was released at the very beginning of Autumn 2014, and undersigned published a review on that material on November 10th 2014. For some biographical and discographic information, you can check out that (superb, but that’s evident) review; enter the band’s name and you’ll come to the specific page).

Frontman Matthew J. Bower once again comes up with a double-album, compiled in a six-panel double digipack, including quite intriguing (cover) artwork. The concept is partly inspired by works of Dante and Virgilio (although, I think that Crowley, or Egyptian / Mesopotamian mythology might have been a source of inspiration too), and meant as a f*ck off to the modernism of temporary society. All together: modern society, f*ck off!

The Spirals Of Great Harm got created, also ‘once again’, with assistance of Samantha Davies, and in its totality it clocks almost two hours of Sonic pleasure. And you know, the first time that I took a listen, after less than half a minute I was sure that this material would be a wonderful journey again. Every time I go through this majestic piece of art, I seem to find new levels, new well-thought details, new adventurous aspects.

Let’s take the opener from disc 1, for example, called Khepsh: actually a monotonous thing, but with so many levels and layers, and such an incredibly obscure atmosphere. It’s like a monumental dronescape injected by eerie, discordant noises, and covered in ultimately heavy, oppressive spheres of disgust. But the album goes further, with a successful ability to add lots of variation. Furthur, for example, sounds much more like an improvised and rumbling guitar-noisescape, with a feeling of discomfort and unrest. The same goes for some other compositions, like the repetitive (which has a totally different definition than boring indeed!) yet quite ominous piece Furfur, or the intense, overwhelming and stifling epic Thunder Dragon. With tracks like the almost ‘melodious’ Nectar And Venom or Tangled Light Of Isis (what an alchemy, a lethal poison and attractive addiction at the same time), the Ritual Noise prevails, creating labyrinths of intimidation and disorder. The electronic sequences deeply penetrate the listener’s mind with a mostly uncomfortable unease, and in a masochistically manner it might give orgiastic aural satisfaction. Hit me baby one more time… And with the final creation on the first disc, Fuck The New Estate, I even think that the penetration of Dark Ambient textures trespasses the limitative borders of the subconscious. What a magnificent soundtrack for lifelessness this is, almost mesmerizing, almost beautiful…

The second disc is different from the first one (cf. 2014’s Draconis). Several pieces, like opener Rotting Jewelled Stormclouds, And Carthage Must Be Destroyed or Ice Nine, are like mystified soundwaves, hovering above a thick, fetid and nocuous mist, with a hypnotic trance-like attitude. It is as if those ‘songs’ (what’s in a name?) are dwelling in murky and gloomy ambience, rather than going deeper into the endlessness of the Black Abyss. The mixture of the transcendental guitar-based tunes, and those spooky electronic devices, result in a hallucinative sound-collage, sometimes even giving over in sort like a meditative effect. I wrote that this setting goes for the better part on this second chapter of The Spirals Of Great Harm, but of course a couple of compositions go even further. A couple of times, and I surely adore it, a monolithic martial heaviness colours the experience in spiralling shades of grey and black; Khephra, for example (a re-interpretation of Khepsh), does, with its acute ‘pushing-forward’ attitude. The Firebright And Linda Show, then again, sounds like an out-of-body experience, a levitation of the inner eye above knowledge and comprehension, comparable and at the same time in harsh contrast with the extravert intensity of Thunder Dragon. Nice… And with that final realisation, called Yuggoth Within, the listener gets simply overwhelmed by Lovecraftian Horror Ambient, a spiritual travel through post-apocalyptic landscapes where no earthly life dwells anymore.