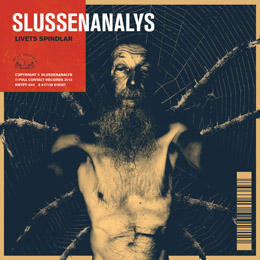 Yea-hah...Slussenanalys is back with a new...single?...I'd hoped the Finnish band might have enough material by now to record a complete album's worth of music!I mean, the band's debut album, Aquila Helvetos Asfaltos (re-issued on CD earlier this year – see review by yours truly posted 24/07/2013 for additional details) was already released at the end of 2011 so, is it that inconceivable then, that the band might have written enough material by now? Of course, óne of its members (Jussi Lehtisalo) is a very busy gentleman indeed (besides being also a member of Falcon (ex-Circle), he was also part of the recently released Mamiffer/ Circle collaboration album Enharmonic Intervals (For Paschen Organ), and also worked on the Aktor single – review should be posted at same time as this; and he's also one of the people running Ektro, you know...if not thé man, indeed!), but could not the others have written new songs? Well, maybe they did, and maybe Ektro just simply wants to work this way...you know, the old-fashioned way, where a single (or singles) pre-date the release of a full-length. Hey, who are we to tell him how to do his business, eh? Besides, as long as at least one of the two tracks on the single (besides the title track, which you can hear by surfing to the homepage of the label, (www.) ektrorecords.com, there's also the track “Knappt Foernimbar”) is an exclusive one, I am personally all for this mode of operation.Now, in waiting for the sophomore full-length, I can only conclude this short review by adding the single to my tear-lists, you know (and the one point off the maximum rating is because of my initial disappointment of this nót being a full-length yet).