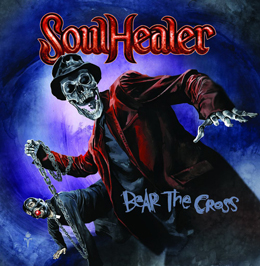 The foundation for what was to become SoulHealer was laid in late 2009. After a few line-up changes, the last of them almost directly after the recordings, they released their first EP Dreamcatcher early summer 2010. The first 300 copies of the EP sold out in less than a fortnight which was a whole lot quicker than the band or anybody else had anticipated.After an EP launching gig SoulHealer did shows around the Kainuu area, always with a huge response from their crowd. At the end of 2010 SoulHealer enjoyed their first international appearance in Kostomuksha Russia at a local festival Nord Session, invited there by none other than the mayor of the city of Kostomuksha.In February 2011 the band began to record their first album "The Kings of Bullet Alley", which was released on 17th of July , and received almost only great reviews from the press. The following tour "The Bullet Alley Road Show" was a great success and brought the boys to places in Finland, they have never been before. One of the most memorable shows of the tour was the appearance at Sotkamon Syke festival opening for Amorphis and Tarot among other big names. At the beginning of 2012 SoulHealer started to write new songs for a follow up for their debut album. One new song called Wicked Moon , which came out end of June. Almost at same time SoulHealer has signed a worlwide deal with Pure Legend Records. One highlight in 2012 was the first concert ever in Germany at the Warmup Show of the Headbangers Open Air at the Lauschbar in Itzehoe on 25th July. In late summer bass player Teemu Aho quit the band for personal reasons. A replacement was found pretty fast with Pasi Laakkonen. In October Soulhealer entered the studio to record the follow up for the debut album “The Kings Of Bullet Alley”.After the band finished the recordings in early 2013, the mix and mastering was done by Janne Tolsa at Note-On Studio, they had to deal with another departure. Drummer Timo Immonen decided to quit the band, as he wanted to spend more time with his family, and SoulHealer got more and more time consuming. A new man behind the drums was found pretty fast again with Jani Nyman. A new chapter in the history of SoulHealer is the release of the first album “Chasing The Dream” on their label Pure Legend Records on May 10th 2013.

The band sticks with the fundamentals that makes classic metal both entertaining and enduring: melody, harmony, twin lead guitars, clean vocals, and a strong rock groove, all wrapped up in steady arrangements. It's a formula that has worked well for ‘Soulhealer’.

Perhaps the most impressive and consistent of these elements is the harmonious vocal and guitar arrangements and the spry dual lead guitar attack. Having a deference for the latter, ‘Bear The Cross’ is easy to listen to for this lover of melodic metal. The leads are sharp, varied, but at the same time strangely unpretentious. You get the idea that neither ‘Sami Mikkonen’ or ‘Teemu Kuosmanen’ have the desire to show off or upstage each other or the rest of the band. It shows some true team work.

As for the songs, most stay within a moderate mid tempo pace with a few, like ‘Unleash The Beast’ or ‘Revealed’, becoming more assertive in their speed. ‘Dead Man Walking and Thorns In My Heart’ likely fall in the former category, but having a somewhat heavier and deeper feeling. But neither like that groove or the necessary melody. Actually, the former song may have one of the smoothest vocal arrangements of all the songs, even though over that deeper sound. In the end, it all works. Soulhealer and Bear The Cross make classic heavy metal fresh for the 21st century.