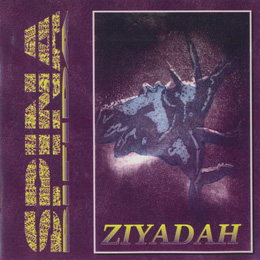 Before I joined Concreteweb’s crew, I wrote reviews for my own sake. I made one for each single recording I bought (tapes, vinyl, and as from the Nineties also CD’s) for my own pleasure. Then, almost fifteen years ago, I joined Concreteweb (it’s a dirty job but someone has to do it; and how else would this label gain such a superior status if I wasn’t involved? …indeed, I thought so…). Since Kunal of Transcending Obscurity forwarded us the re-release of the (cult?) album Ziyadah by Dutch act Spina Bifida, I started searching after the review I did back then – and then we’re talking about 1993 or 1994, when I wrote that stuff. Apparently I was quite impressed back then, but unfortunately I seemed to have forgotten about this album, since I am quite sure I didn’t listen to it anymore for more than twenty years, I think. Forgive me for this, but in mean time I have put this material on for several times again. The same goes for the 1991-demo Symphony Of Indictment as well (that cassette must be stored safely in my dungeon), but the good news is: that demo has been added on this re-release as bonus. All together: hurray!

So, Ziyadah was originally released via Adipocere Records, back then one of my favourite labels. The material of the album was recorded during Autumn 1992 at Tapes Productions, and shortly after the release (and after some intense live performances), the band split up. Apparently they reformed a couple of years ago, and I guess in await of upcoming new material (?), the band decided to re-release this sole full album. Two remarks however, before starting to praise the material. First of all, the intro and outro are switched on this re-issue. It seems odd (though it does not really hurt), but it seems to be a procession-error. At least, that’s what the media say, because, and that’s ever more strange, my (digital) copy is all right. I compared it to my original album, and both intro and outro are put on the right place. But I don’t know about the other pressings… Secondly, the lyrics of Witchfire come twice in the booklet, and the ones for Reverse are missing. Another error during the release process. This I cannot verify, for this copy does not contain the lyrics.

Anyway, after quite some strange introduction, these Dutchmen bring very dense, oppressive, slow-paced and morbid Death Metal, and I don’t understand why they did not reach a cult-status by this material. Maybe because they passed away too soon? Maybe because the audience, me included (mea culpa, mea culpa, mea maxima culpa!) didn’t offer this band the attention they surely did deserve? Sh*t, you reader, but this is Cult-stuff that, unfortunately, never reached that status. Actually, what Spina Bifida bring is a majestic, obscure (!), haunting (cf. a song like Reverse) and oppressing form of slow, very slow Old School Death Metal, somewhat in the vein of Beyond Belief and Asphyx, Autopsy and Goatlord, Disembowelment and Paradise Lost’s earliest years (Purest Queen is the perfect example, I guess, of this comparison).

It is rather simple, for Ziyadah stands for grandiose, and I do mean GRANDIOSE, Doom-Death Metal, something that encloses everything, but really everything, that is necessary to can make this kind of old styled material considered as ‘cult’, as essential for the further progression and development of the scene. And you know, there is not that much that jumps out of the box, but this material is just so good, so fabulous, so intriguing… This album flourishes in its simplicity!

As bonus this re-release comes with the magnificent Symphony Of Indictment-demo, originally released on tape in 1992. This material was recorded at the MKW Studio in very early 1992 with another line-up. The four tracks made / make part of the Ziyadah-album too; that’s why I think that, besides some modest melancholic incentive, there is not much ‘additional’ to say about this additive. But melancholy, of course, can penetrate borders… Anyway, the least I can say is that this Dutch band did impress long before their full album, and also this: what a sound! No, it’s not clean or decent – it’s just the ideal sound I want for this kind of stuff. Once again, for the last time, I want to apologize for having this band ignored / forgotten too long. So I’ll make it up right now: KULT!!! If the upcoming album (there will be one, I hope. …please…) is at least half as impressive, I will try to get a laugh on my (pretty) face…