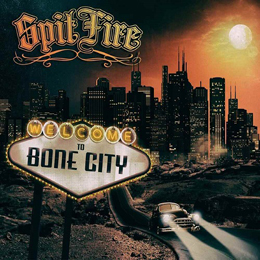 Spitfire are a German band, and this is their second album.  The theme of this album is Bone City, a city full of chaos, violence, lawlessness, in short a city where Judge Dredd would have a lot to do.

As might be expected with such a theme, the music is pure energy from start to finish.  I would dare to call it a mix between the Dropkick Murphy’s, Motörhead and maybe a little Volbeat as well.  It’s straight forward, no nonsense rock’n’roll, kinda like the Ramones but without the punk influence. It’s not a bad album, but it’s a bit too much of the same.  In total there are fifteen songs on the album, including a cover of Kenny Loggins ‘Danger Zone’ a song that featured in the Top Gun soundtrack.