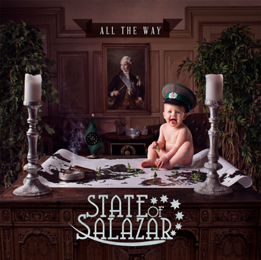 After releasing an EP in 2012, these Swedes now return with a full album.  I guess for anyone who loves AOR music with it’s roots in the eighties, this album could turn out to be a real gem.  To start with the vocalist Marcus Nygren immediately made me think of Bobby Kimball.  The music this band brings sounds a bit like a mix between Toto and Survivor, with maybe a hint of Journey thrown in as well.

The album was over before I knew it, and despite not being able to pinpoint one particular song as the best on the album, and neither having found a song that created a ‘whaow’ effect,  the 12 songs on this album are all very good, easy-listening songs, that had they been released in the eighties when AOR was at it’s heydays would have given this band a massive audience and massive airplay. Sadly those times are long gone, but if you want to rekindle your love for AOR with a new band, this is stuff you must buy.  They still lack a bit of an own personality, but for a band this young, if they continue to release albums like this, the future might be promising.