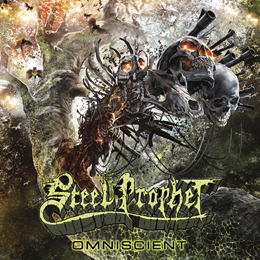 With a history goin' back to 1983 and more line-up changes than one can count on the digits of hands and feet together, it would take me too long to go into this Los Angeles, California based Progressive Power Metal band's career with any degree of detail...so I'll keep things short and synthesized to the strict minimum, this time around. Suffice it, to start proceedings, that Omniscient is the first studio album the band releases in 10 years!

One might divide the band's career into several periods, which obviously starts with the beginning period, when visionary guitarist Steve Kachinshy went through a couple of line-up changes, before moving the band to California in 1987. From that first period, a 7-track self-titled 1986 demo exists, which was recorded with the band's first singer Gary Stocking, and drummer John Tarascio...whom would join Steve to California.

The duo recruited new members from the local scene, and again went through a line-up change before recording their second demo, 1988's 4-track Visions Of Force. Along for the ride already: long-term bassist Vince Dennis. The line-up again shifted to incorporate a new guitarist (a position which would revolve throughout the band's career) and the ultimate of singers, Rick Mythiasin, and with that set-up the band recorded 1989's 6-track demo Inner Ascendance. What followed next, was a couple of years of relative stability within the band, but also with little moving on the release front...in spite of the band playing support slots with such great bands as Armored Saint, Candlemass, Fates Warning, Flotsam & Jetsam, Manowar, and Sacred Reich! After a failed deal, the band signed to the obscure North German Brainstorn Division label, who released the band's full-length debut, The Goddess Principle, in 1995 (the album was picked up that same year by Germany's Art Of Music, giving the band a slightly more expanded bit of promotion. Tarascio opted out, and with revolving drummers, and new guitarist Jon Pons, the band further release the 1996 Continuum EP and 1997 full-length Into The Void, again through Brainstorm Division.

A new period came, after the band signed to Nuclear Blast, which released 1999's Dark Hallucinations to great positive response from both media and music fans alike. Messiah followed swiftly in 2000, with the compilation album Genesis (which included the Inner Ascendance demo and various cover songs) following that same year. Book Of The Dead (which was already written and pre-produced in 2000) was eventually released in 2001, followed up with 2002's Unseen.

Yet another new period, as Mythiasin left the band on grounds of creative discussions (Kachinsky putting his stamp on everything, and demanding of the singer to moderate the use of his typical high pitch). He's exchanged, after a long search (which also included finding a new second guitarist) in 1993 for renowned LA singer Nadir D'Priest (whom had started his career with London, and had gone on with D'Priest and VVSI). Following the recordings of a promotional 3-track demo (contract with Nuclear Blast had terminated, and the band was free to seek out a new partner), the band signed to Massacre Records, whom released the band's second-to-last studio album, Beware, in 1994. Interestingly, Beware was the induction into the band's fold of bassist Glenn Cannon and drummer Gene McEwen, both to stay for a long term (the latter however replaced by current skinsman James Schultz in 2011).

Time to talk a bit about the band's music, which gradually changed over the years. You see, in their beginning years the sound was geared towards a more complex Progressive Metal, much like in the style of the first three Fates Warning albums. With the 1997 demo, the style was simplified somewhat toward that of Iron Maiden, so-called to make live renditions of the music less demanding. With signing to Nuclear Blast, the music geared even more toward Iron Maiden's stylings, losing complexity in favour for speed and power. With D'Priest (and new second guitarist Tim Thomas) entering the fold, a new stylistic change came, as his vocal style brought a slight Glam Rock flavouring.

D'Priest didn't last for long though, being “replaced” for Agent Steel's Bruce Hall half a year following Beware's release. However, no recordings with him exist, and neither were any shows done with him. In March 2007, Kachinsky reported that Mythiasin had rejoined Steel Prophet, and a new song entitled “Trickery Of The Scourge” was uploaded on the band's MySpace page in May 2008, while at the same time it was announced that plenty of new songs were already being recorded. In January of that year, the band had already been in focus again, as Steel Legacy Records had released the compilation album Shallows Of Forever, consisting of very old recordings from even before the Inner Ascendance demo! Oh, important detail: after so many years of operating as a 5-man band with two guitarists, Kachinsky found himself performing those duties on his own, following Thomas' departure from the band in late 2007. Further news on the upcoming album came in February 2011, when Kachinsky announced through the band's internet forum that the band had decently demoed 8 songs, and that proper recordings would start when the band had gone through the pre-production of 6 more. One of the songs would be a new Metal version of the fun-song “Oleander”, which the band had used as outro of their Book Of The Dead album.

And so finally, after all that time, the album's there, 6 years in the making! Well...actually that's not all yet, because in the meantime German label Pure Steel Records has re-issued the band's 1995 album The Goddess Principle on a rotation of 500 vinyl LPs, this January 1st of last - see review by colleague Vic, posted 01/02/2014. As far as sound quality goes, I'm sure Vic would agree that things are in tip-top shape these days, and as far as the music itself is concerned, I'm certain that he would revel in the guitar-oriented Heavy 'n' Speed Power Metal brought by the guys. As promised, the remake of “Oleander” is present, as is Mythiasin's typical and charismatic high-pitched voice, by the way! The guys also took on a version of Queen's “Bohemian Rhapsody”, where Mythiasin actually gets in a couple of wrong notes, but otherwise performs I grand way! Great twin guitar work, with melodic yet complex (I might also have written 'complex yet melodic') can be found throughout the album's 14 tracks. Meanwhile...if I didn't cross-wire my info sources, it would seem that Vince Dennis has returned to the fold as the band's bassist, and one Chris Schleyer has been recruited as the band's second guitarist.

At Cruz del Sur's facebook page, you'll find a (live) video for “Bohemian Rhapsody” (as recorded at 2013's Bloodstock festival), and the band has provided a 10-minute teaser sampler audio/video of the album (but I'm uncertain as to where that's available – you might try YouTube, I guess)...but otherwise no material off the new album is available, except perhaps on the album's possible Amazon or iTunes pages (haven't checked...sorry!). Lots of older stuff is available at the band's facebook page (www.) facebook.com/SteelProphet (and so also at the band's ReverbNation page), though! At any rate, if you're into quality Heavy Metal and twin guitar Speed Metal assaults, then this band is something to be checked out, for sure! Now, if the singer hadn't performed that small mistake of trying to tackle a certain part of “Bohemian Rhapsody”, I would gladly nominate the album for my 2014 year-lists!