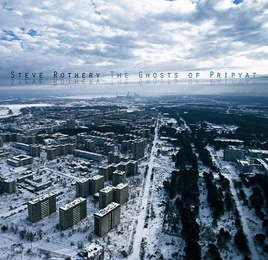 Steve Rothery is the guitarist, and longest running member of the band Marillion.  This is his first solo-effort, despite being active in the music business for over thirty years (he started in Marillion in 1979).

Just like the Toundra album IV, this album is also a completely instrumental album, centered around the fantastic guitar playing of Steve Rothery.   Guest musicians on this album are Steve Hackett (Genesis) and Stee Wilson (Porcupine Tree).  The rest of the band is made up of Yatim Halimi (Panic Room) on bass, Leon Parr (ex Mr. So & So) on drums, Dave Foster (Mr. So & So, Panic Room) on guitar, and finally  Riccardo Romano (Ranestrane) on keyboards.

Although you might expect to hear lots of Marillion coming back in this music, this is not really the case.  There are similarities of course, which is obvious, you cannot expect this man to drastically change the way he has played guitar the last thirty years, but the style of the music is different.  This is the kind of music you put on as background music, while relaxing with a good single malt whisky after a copious meal.

What the relation of title of the album to the songs is, is not really clear to me.  Pripyat being a town founded in 1970 in the Soviet Union, and totally being evacuated in 1986 after the disaster with the Chernobyl nuclear plant, and since being a ghost town.  The artwork of the sleeve is, quite appropriate, an aerial picture of the (remains) of the city of Pripyat.