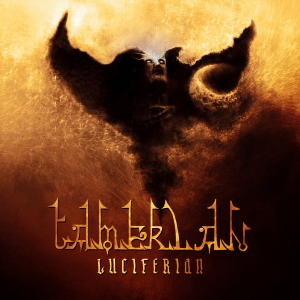 This makes sense… Tamerlan, the solo-outfit of Serbian Timur Iskandarov, signed to Casus Belli Musica, a fantastic Russian label run by a great crew of devoted Music fans. Dmitry and friends: Уважение! I think it’s more logical to release a new Tamerlan-album via Casus Belli Musica, seen the musical background, because I was quite surprised when this project did release the last recording, Ain, via Debemur Morti Productions, a label that not exactly focuses on (Neo) Folk material at all. But it did not matter then, nor does it now – it just makes more sense this time, when noticing joined forces in between Tamerlan and Casus Belli Musica.

Timur wrote and recorded a couple of new compositions, which have been recorded (with some guest and session musicians, especially on drums and percussion) during Summer 2016 at the Duru Studio by Mihajlo ‘miKKa’ Obrenov. And then again, this element makes no sense! Mihajlo is, as far as I know, involved with quite weird and eclectic stuff, being industrialised, punky or just psychotic / psychedelic material, going for both the bands / projects he’s involved with (like dreDDub, Mrt or Cut N Paste), as well as the projects he helps out in the studio as producer / engineer / mixer (Crna Barbi, Moki Llok, Microwaved, Drop Dead or Mefisto, amongst others). This time he takes care of production, mix and mastering for a project that is quite ‘tranquil’ in a certain sense, at least compared with those things usually involving Mihajlo. But then again, here too: what the f*ck, for it does not matter; it’s the result that counts.

So, I’d like to start with the sound on Luciferian. It’s quite clean, getting rid of irritating background noises or an overload on levels. But that also means: little too clinically produced, for the roughness that might characterise the essence of the ‘message’ gets lost. Yet then again, it makes all details being more audible and respectable, focusing on the sum of all individual elements rather than balancing in between the separated details.

Music-wise, Luciferian sort of continues where 2014’s Ain did stop. Therefor I’d like to refer to the review on that album, in case it might interest you. It was written by undersigned (for what it’s worth) and eventually published on July 13th 2014. But it’s quite different too at the same time.

Let’s take the opener Patricide, for example: an acoustic Neo-Folk / Apocalyptic Folk piece with a Goth-Rock vibe (the guitars and voice timbre), lots of additional extras (different ‘other’ vocal injections, hidden yet present), a hint of Gothic elegance within the atmosphere, and an approach that differs a lot from the ‘random’ bands within this scene. Burn In Peace comes with an experimental, even psychedelic touch. Avant-garde guitar melodies, whispered voices, several changes in structure, crazy tribal percussions; it’s quite a strange experience to listen to this composition. Until Dreams Are All That’s Left comes with a more traditional approach. The typifying acoustic guitars (somewhat repetitive) and semi-whispered yet warm vocals are accompanied, this time, with some subtly-introduced synth-lines, which do implement a certain tranquillizing element. Initially the next song, Come And See, continues that direction, but it’s more integer than its predecessor. Besides, the fabulous voice of Arcana's Cecilia Bjargö (she did some guest vocals on the former album too) gives that little more, that subtle touch of ethereal majesty. Besides, this song evolves, with a heavier intermezzo and a semi-Oriental piece towards the end. Yet still this contrast with the main part of the track sounds organically correct. The Beholder is such track that combines the primal essence of minimally-acoustic (Neo) Folk with some additional surpluses based on the essential acoustic guitars with empowerment from whispering voices (and some harsher throat-eruptions on the background), tribal percussions and floating keyboards. This song slowly evolves in Apotheosis, an instrumental piece that is quite psychedelic in a Sixties-oriented definition – you know, when playing the sitar after taking some mushrooms of LSD. The track that comes the closest to the minimalism of ‘traditional’ Neo-Folk is Lucifer’s Son, based on the simplicity of acoustic guitar riffs and vocals, but towards the end pounding drum patterns and esoteric violin melodies turn the whole into a warm concept with a satisfying apotheosis. Faces In The Fog, finally, is like the opening track, being a fine Folk piece with that Eurasian pride: a mesmerizing background in sound, narrative-singing vocals, semi-oriental guitar injections, and softly-pushing tribal percussions.

Tamerlan prove to be an entity quite noticeable within the current scene, with an international importance easily comparable to the status of acts like Current 93, Death In June or Sol Invictus in the past. Okay, this album might be less ‘apocalyptic’ than the former one, yet within its specific genre, it’s a monument.