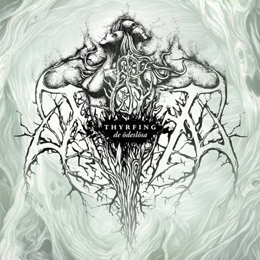 NoiseArt Records is a label that is growing enormously. Not that evident, for the Music scene is going through a crisis. In this label’s case it has not to do with signing big-selling commercialised acts, yet with signing qualitative bands. Oke, I do not need to exaggerate, because nobody is to like every single release through NoiseArt; I do not either. But most of the albums (and so it leads to the bands as well, of course) are of a more than average quality.

The label recently annexed Swedish horde Thyrfing on its roster. Throughout the years, these Vikings recorded several studio albums, with a continuously progression in the most optimistic definition, evolving from slightly catchy Folk Metal into dense and powerful Heathen Black Metal with a dark-symphonic touch. For sure I do appreciate their oldest works (mainly released through reborn label Hammerheart), but their latest releases (cf. as from the band’s Regain-period) were unquestioningly stronger in many aspects.

De Ödeslösa opens with Mot Helgrind, a majestic epic track with a bombastic sound, a slow yet pounding rhythm and a victorious atmosphere. By the sweet caress of Thor’s hammer, what an excellent hymn to start with! Besides, the rather long track (just over six minutes) consists of different changes in tempo and melody, including an acoustic passage, a harmonious choir at the end, and a spirit à la Enslaved, Bathory, Falkenbach and the likes. Next comes Fordom, which is heavier than the opening track, and little more catchy. The importance of the keyboards here too is undeniable, drenching the whole into a quasi-Wagnerian grotesquery, yet without losing itself into fake emotionality. And as a matter of fact, the same goes for the other songs as well. Dark and grim, glorious and epic, orchestral and massive Viking / Black heroism, translated into a musical experience; another testimony of Thyrfing’s excellence.

For the interested ones: the band is named after a cursed sword that appears in several tales from Scandinavian mythology. Raise the blade!