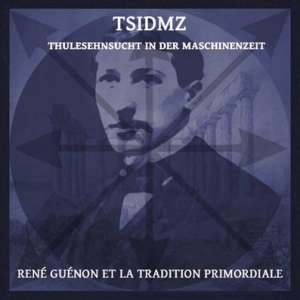 I was hesitating – would I write a short essay on the ‘Eurasian’ current or not… But in order to comprehend the philosophy behind TSIDMZ’s concept, it would be a missed chance not to do so. So here it is. The Eurasian ideas, as being related to an anti-capitalistic conviction, were born almost a century ago, trying to focus once again on the human being as existing like an entity of flesh and spirit, rather than being a part of an economic, world-dominative and fake-democratic mechanical construction. Being inspired by philosophers and sociologists like Alexander Doegin, Claudio Mutti, Jean Thiriart, Julius Evola and several others, this philosophy about multi-culturalism and inborn supremacy (hey, aren’t we the elite of a lost race?!) sort of acts like a counterbalance to the narrow-minded extremism of one-directional religious beliefs, as well as the artificially constructed ideas behind expansionist economics. This in short is what led to the idea of creating a Eurasian power in order to protect, and reform, the pride of our inborn identity. I can go quite ‘deep’ into this subject, but I’d like to refer to the net and literature on this mostly interesting, and quite appropriate / truthful ideas.

Anyway, with this prelude I want to introduce the Eurasian Artists Association, a collective of artists from different kinds (musicians, poets, painters, writers etc.) that sort of support the ideas once born out of Ungern von Sternberg Khan’s visionary mind. Via aural and visual art, they sort of want to focus on a fight against a narrow-minded eon that absorbs the essence, the spirit of traditional identity. How can we protect our roots against an all-overpowering expansionism we try to ignore, we try not to see. When it’s too late, we’ve lost our heritance and there might be no turning back once we’re slaves of a lifeless global technocracy. Anyway, I wanted to keep my introduction short, so: Eurasian Artists Association were formed by e.g. Rudolf (Sonnenkind) and ThuleSehnsucht In Der MaschinenZeit aka TSIDMZ. The latter is a project by Italian artist Solimano, who did quite some releases via labels such as SkullLine or, evidently, Old Europa Café. Within a trilogy based on the Eurasian tendency, René Guénon Et La Tradition Primordiale is a next chapter. Here too I will very short (for there is more to find on the net and in the bib): René was a French author, focusing on metaphysical and esoteric themes, mono-theistic religion and symbolism.

…and since this is a review on an album, I’d finally start etc… Once again, Solimano collaborated with many other, same-minded musicians (cf. Sonnenkind, Barbarossa Umtrunk, Porta Vittoria or L’Effet C’Est Moi, many of them being involved with the Eurasian philosophy too – and several of them have recently been reviewed by undersigned, also for recordings gratefully offered by Frater Rodolfo’s Old Europa Cafe). It’s a conscious decision, for it increases the variety, the diversity of both sound and conceptual ideas. Solimano searches for eclecticism and enrichment in both techniques and sound.

Being inspired by the ‘principle of unity’ by Guénon, this album lasts for more than fifty minutes, and it has been mastered by Raison d’Être’s Peter Andersson (once again: hello Old Europa Café!). the opening song is not that original, yet quite remarkable: Ewigkeit Im Saltarello, based on the much-covered Saltarello piece, an early medieval Folk song that has been interpreted a thousand times before. This specific edition was performed with colleagues of L’Effet C’Est Moi, and it is for sure a very unique interpretation, at least for the renewing approach / performance of it. This trend gets continued throughout the whole album, by bringing some sort of esoteric and spiritual mixture of Dark Ambient, Wave, Neo-Folk, Neo-Classical and Martial Industrial. Yes, this is a description that can go everywhere, being extremely vague and, at the same time, specific – but it does cover quite some of TSIDMZ’s essence. Each single composition differs a lot from any other, which has to do with two factors: the creativity of Solimano and the appearance of guest / session artists. I did mention the styles involved, and within these currents one might search for the core of this album. A prominent martial (read: trans-European, or better: trans-Eurasian) attitude reappears time after time, not only in atmosphere / spirit, yet also through the aural aspects: martial drums, propaganda speeches, pre-folky melodies, warlike atmospheres, and so on…

The intention of TSIDMZ is, sonic-wise, to have an approach quite open-minded, quite diverse, and I think, no, I am sure that this mission gets accomplished. Every single composition is so different from any other, stylistically, performance-wise and from compositional point of view; and still this project maintains to keep a cohesion, for the whole atmosphere breathes the very same ‘post-atomic’ conviction, no matter whether a piece is rather ambient, industrialised or folkish-traditional. That’s a strength courtesy of ThuleSehnsucht In Der MaschinenZeit! It represents the vision on the current ‘kali yuga’ we’re going through right now, and maybe our western arrogance needs some introspection??? At least TSIDMZ are trying to try to have the listener, which is us, to focus on some revision of the political structures we’re art of. And seen that this great idea happens by means of sublime Aural Art, I am sympathisant, I’m not afraid to support, to define, to promote the philosophy. Once again, the musical execution is quite open-minded, with inclusion of oriental sounds (especially the second half, the Actio, might refer to Guénon’s Egyptian adventures), hypnotic beats and post-apocalyptic melodies, but for sure it does represent the essence, the core of the philosophy behind the whole concept.