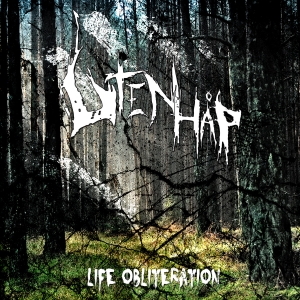 Danthor ‘Wildcrow’ Bjårmyr aka W. is a guy from Norway; more specifically Svalbard, a group of islands far North in the Arctic Sea, also known as Spitsbergen. He started playing the guitar at a very young age, and he did win several conquests. W. is also active in several other bands and projects (see further), mainly as guitar player, often as singer too. But he’s most productive under the moniker Uten Håp, which is Norwegian for ‘hopeless’. And that band-name (actually, it is not a ‘band’, for W. is the sole member of Uten Håp) surely fits to the musical choices.

W. did form Uten Håp in very early 2017 as a distinctive yet related outfit to Rive, and one can consider it as a therapeutically-used (side) project. Therapy through Music, for it canalises this guy’s own negative thoughts, which can be recognized by the unhappy audience too. The concept defines human interaction and its consequences: the pain we cause, the pain we got, the lack of ability to express our feelings and emotions, and the narrowmindedness and pathetic existence we’re subject to. Despair, loss, hate, loneliness, depression, anger, anxiety and isolationism are like keywords to explain the intentions behind this project, I think. No, I do not think so; I am sure of it.

W. has been extremely active (does the guy ever sleep?), being in dozens of other bands and projects (like Inkrust, Arkra, Ov Mhurn, Wintercrown, My Own Demise or Stormgaze, to name but a few), yet especially under the Uten Håp moniker; there are many hands full of EP’s, and Uten Håp has been part of several split contributions too (with another splendid project especially, being American outfit Apothecary; and oh yes, I adore both of them…). In Summer last year, this project released Life Obliteration, a seven-tracker that lasts for fifty minutes, and which can be considered this project’s first official ‘real’ full length recording. It got released via the young but promising and upcoming U.K.-based label Cult Of Osiris. As a prophet I foresee a bright future for them, haha…

Cult Of Osiris very recently released a compilation album, which features Uten Håp. The title of that work is called DSBM, and that sort of covers the sonic approach of this one-man entity for sure (FYI: it will be reviewed and published soon!). There are different variations within the ‘Depressive Suicidal Black Metal’ genre, and some I like more than others. I know that this isn’t but a subjective thing, but this project is part of the first: the ones I do like. It’s the case for quite some time, but with this debut album, Uten Håp climb up, out of the darkest abyss. That grandeur starts as from the opening song, which is the title track. After a very short introduction, you’ll undergo the essence of this outfit’s Aural Art: the sonic definition of all that is the opposite of happiness, joy, fun. For the better part, the material is a well-balanced mixture of melodic yet buzzing guitar lines and deep basses, rumbling drum patterns and icy vocals. Within this genre, vocals are often of the hysterical kind, and more than once I think it gets exaggerated totally. Not in this case. The screams are not ‘just hysterical’, yet rather wretched, painful, expressive, even extravert. I think that’s a good thing. Besides, W. does not actually ‘sing’, I mean that there are barely lyrics involved. Yet still his voice is like an equivalent ‘instrument’, organically in symbiosis with the ‘real’ (read: physical) instruments. More than once, tremolo leads and riffs draw attention, with their hypnotic and dreamy atmosphere. These mesmerizing guitar waves paint a landscape of hopelessness, but hey, depression might not seem that bad at all, if you see the beauty of it. Yes, that’s the therapeutically-used character behind this project. Great, really great to ‘dissect’ this approach.

That title track is sort of an example for the whole album (and much more material by this project). Many layers of strings, voices and percussion are intertwined into a firm, full package. But this goes further too. It might not be that renewing, but whatever, it is part of this musical genre, and then I am referring, for instance, to the use of (grand) piano, cf. the introduction for Painful Memories. It’s composed in a Contemporary Classical Music style, elegant, sober, integer and personal, expressing emotions of grief and sadness, but it works, it fits. Also the use of (semi) acoustic guitars, like at the beginning of Path of Sorrow (for what it’s worth: my favourite composition on Life Obliteration!), is not exactly like reinventing the wheel, but it is oh so appropriate, of so complementary to this specific sonic trend.

The overall speed, what else did you think, balances in between doomy and mid-tempo. The slowest pieces, and as example I can refer to Painful Memories once again (see former paragraph), come with a subtle funereal touch. No, this stuff is not exactly Funeral Doom oriented, but believe me if I say that the border in between the most bleak side of Funeral Doom and the DSBM-approach by Uten Håp isn’t but a theoretically existing matter. Fans of Funeral Doom surely will adore this stuff too. On top of it, the extremely deep, heavy sounds of the rhythm / bass guitars (in all tracks) and the few more ‘grunted’ screams strengthen that funereal aspect.

The sound quality is another issue. The production is enormously rough and unpolished, lacking trim over-production. Who cares? I do not. On the contrary; it makes the whole experience sound even colder, bleaker, grimmer for sure. But if I might enounce one remark (and as the human being with the reviewing duties on this matter, I may), I would prefer a more balanced mix. When the abundant leads bewitch the listener’s observation, the whole rhythm section (the gloomy screams excepted) made fade away, unfortunately. Especially the drums / percussion get lost within the whole sonic puddle. Though, within some of the more energetic excerpts (listen for example to Non-Existent), you do not fail of those aspects. That minor mix is just a small detail within the glorious totality of this album, but as an honest reviewer (don’t you dare to challenge me…), it’s my duty to say so.

Anyway, Life Obliteration is a great piece that will satisfy many doomed souls – not only the suicidal ones, yet also those who just appreciate the dense, suffocating and moody side of life and Aural Art. I beg for a slightly improved mix of the background instrumentation next time (no, do not dare to come up with a surgically clean production either!), but please, continue this path of unhappy elegance, for it makes me happy (and elegant?)…