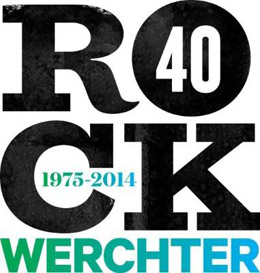 Rock Werchter, one of the greatest festivals in the world.  What once started as a little one day festival in 1975 in Werchter Belgium in a tent, has now become very big, and lasts four days; with multiple podia.

This CD is a compilation of the countless groups that since 1975 have visited the festival, although some names are missing, despite the fact that they made the festival what it is today.  To name but a few of the better known names : U 2, Metallica, maybe this has to do with royalties but also bands like Midnight Oil and the long forgotten The Alarm are missing.

CD’s one and two brought back my younger days, when I used to go to the festival, whereas CD 3, for me personally, is a bit disappointing.  There are some good tracks on it, but most of the bands are either completely unknown to me, or I’ve heard just one or two songs of them.  CD 4 picks up where the first two CD’s stopped, with also some modern bands, but with more of a rock theme though not all of them. What this CD shows is that Rock Werchter, despite all the critics they’ve had these last years, for ever increasing ticket prices etc. has been, and probably still is, one of the most diverse festivals, where you can hear bands from almost every genre.