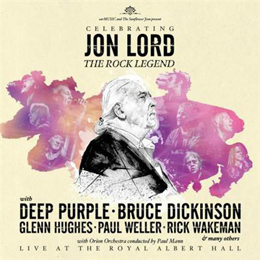 Well, it would seem that it's quite impossible to talk about this double disc album, without goin' into its background, and saying something about The Sunflower Jam, a benefit project started up in 2006 by Jacky, wife of Deep Purple drummer Ian Paice.

In short (the story is detailed in the album's booklet), Jacky wanted to do something for those fighting cancer, after having been contacted by friend at the Univercity College London about a boy named Kevin, whom was suffering from terminal leukemia. The boy needed a boost, and so the friend asked whether Jacky couldn't arrange for her celebrated husband to sign some bit of merchandise to offer the kid. Well, not only did she get Ian's autograph, but she also induced her brother-in-law Jon Lord to sign, and arranged for the both of them to be present when handing it over to the boy. Kevin dies a mere two weeks later, but Jacky had become deeply impressed by positive work of the complementary care team, and there and then she came to the decision to raise funds in aid of those dedicated people's wonderful work. Since then, she started organizing high-profile Rock events which started out in the usual iconic London venues, but grew to eventually sell out the infamous Royal Albert Hall. The Sunflower Jam however is not restricted to London per say, and there's now fund-raising activities throughout the UK. In the beginning, The Sunflower Jam was set up as an annual gig, and the rumours about the sessions (the very first ones were done in front of guests and music business professionals that would contribute to the charity), which included Deep Purple, Robert Plant, Brian May and Alice Cooper, sounded too good to be true, to the point that some people thought the whole thing to be nothing but wishful thinking, an urban legend to say the least! But soon enough the sessions became a cult night open to the audiences, a real must for the artists themselves, as they were free to step out of their own world of normality, and enabled to enjoy playing music together with colleagues, friends, and occasionally even secret rivals, playing for a common goal that lay outside their usual commercial thoughts. For the audiences, of course, the chance to see these magnificent musicians together on one stage was simply a dream-come-true!

About Jon Lord, keyboardist-extraordinaire. It's at one of the earlier TSJ's, that he played for the last time with his friends in Deep Purple, an occasional at which he did a peaceful “war of Hammonds” (citation from the info sheet we got along with our promo copy of the album) with his successor, Don Airey. Lord himself felt it was time to retire from a life on the road with a Rock band, and started concentrating on that first musical love of his: Classical Music and the combination of Rock elements into it. When, in July 2011, the diagnosis came in that he had pancreatic cancer, he fought the disease with all means available, convinced that the wide range of interventions, including various complementary and non-pharmaceutical therapies alongside targeted chemo-therapy, would eventually cure him. He eventually lost the fight, and was taken from us in a year later at the London Clinic (after suffering from a pulmonary embolism), weeks before the release of the remake of what's universally known as the first-ever meeting of Classical Music and Rock, namely the Concerto For Group And Concerto...the very same composition Deep Purple played at The Royal Albert Hall in 1969!

When the idea arose to do a celebration “Jam” for Jon, the organizers immediately agreed that there was gonna be an orchestra involved...in this case the Orion Orchestra, directed by Paul Mann. Then came the embarrassment of choice of material to pick from, because material written by Jon goes back to the mid-sixties! Then, Paul Weller (The Jam – of the band by that name, not the project lovingly named so!) was confirmed as contributor to the evening, and everything took shape. Because Weller would be the perfect artist to perform the opening songs of the evening, two tracks (including the 1966 chart hit “I Take What I Want”) from Jon's first R'n'B band The Artwoods. They were performed in a collaboration with the “house band”, consisting of guitarists Murray Gould and Micky Moody, bassist Neil Murray, pianist Wix Wickens (head of the house band), organist Andy Wallace, and drummer Mario Argandoña.

Speaking from a chronological standpoint, the program should then have moved on to material from Deep Purple, but there were different ideas. In stead, upon the stage next came drummer Ian Paice and guitarist Bernie Marsden, two of Jon's collaborators in the short-lived Paice Ashton Lord band which arose from the ashes of Deep Purple in the mid-seventies (they only released the one album, Malice In Wonderland, folding while leaving a second album unfinished). As replacement for Tony Ashton, Phil Campbell (of The Temperance Movement) was called onto stage, as was guest bassist Nick Fyffe. Together with remnants of the house band, they performed the songs “Silas And Jerome” and “I'm Gonna Stop Drinking”. Both songs, by the way, also find the orchestra joining in.

Next up, the house band (back to Gould, Moody, Wallace, Wickens, and Murray...but with Paice still on his drum stool) welcomed singers Steve Balsamo and Sandi Thom to the stage, to perform a heartfelt version of one of Jon's favourite songs, namely the closing track of the 1974 album Stormbringer, “Soldier Of Fortune”. The orchestra again joining in, by the way!

“Soldier Of Fortune” was the precursor of one of the most eagerly awaited moments of the evening, namely the appearance of Glenn Hughes, whom really gets a warm reception upon being announced...as do Bruce Dickinson (whom was to sing duet with Glenn - whom would of course also take care of bass duties - on the Deep Purple tracks “You Keep On Moving” and “Burn”), Ian Paice (who'd stepped off stage for the previous track), and Don Airey. Unannounced, but very present during “Burn”, was additional organist Rick Wakemen...also performing and joining into the fray, was the orchestra!

The last song of that evening's first part, finds Glenn singing the ballad “This Time Around”, which he composed with Jon during Deep Purple's recording sessions in 1975, while the other members were actually having a drink at the bar down the street. It's performed with a reduced house band (consisting of Wickens on the piano and Nigel Hopkins on the Moog bass/ Synth pad) aided by the orchestra. The song also ends the first disc of this celebrative album.

The second disc is a somewhat more straight-forward affair, as it finds the current Deep Purple line-up (consisting of original Mark II members Ian Paice, Roger Glover, and Ian Gillan, and “newer” members Don Airey and Steve Morse) starting off a set with two songs (“Uncommon Man” and “Above And Beyond”) of their then current album NOW What? Then follow fairly expanded versions of some of DP's past, stating with the moody “Lazy” (on which violinist Stephen Bentley opens proceedings in an organ duet with Airey...the duet/battle is contiued throughout the song, by the way) Next up are “When A Blind Man Cries”, “Perfect Strangers”, “Black Night”, and the night's closing song “Hush”!

To ask me to go into more details about those songs, is like playing them for you, so why don't you go get the album in stead, eh? I mean, you know the material, you know what the band stands for, and buying the album will bring money in the accounts of both the Sunflower Jam benefit, as well as in that of the Jon Lord Fellowship, which focuses on helping researchers in the pancreatic cancer-curing field! 'Ave a heart, give a buck, and get a real nice album to boot! I'm sure a lot of those whom were there that night will buy the album to start with, as a reminder, and those not having been there can apparently see some images of the evening at (http://) youtu.be/jzV7lcx7nRs! Enjoy...