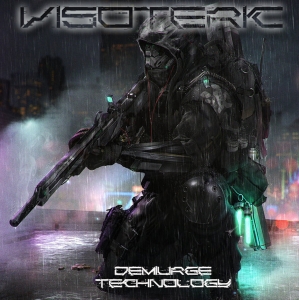 Faunus Amadeus Loki acts under different monikers, both in collaboration with other artists (think Dracul - Order Of The Dragon), as well as solo (Herrenvolk, Stark von Oben, Endoki Forest); I recently wrote and updated the review for Endoki Forest’s Black Sorcerers Forest or Herrenvolk’s EP Imperator – see the upload of March 4th 2016 and March 28th 2016 respectively. John Donadio (his real name) also has a more Techno / Electro-oriented outfit, called Visoteric, with the digitally released Demiurge Technology recording as first result. The seven-tracker gets distributed via this guy’s own Volk Lore Music-channel, and indeed it is another different, yet at the same time recognizably- comparable effort.

In essence there is once again another comparable structure going on, if you compare Visoteric with Herrenvolk or Endoki Forest. The obscure, malignant identity is comparable, and so is the merciless, uncompromising atmosphere. …and of course the superb quality of the material. And when I come back to the latter, well, that might be quite different to most other projects Faunus is involved with.

Visoteric brings a somewhat trancelike and hypnotic, yet multi-layered form of Dark (and I mean ‘dark’ as in ‘Dark’!) Electro. The hypnotic elements have to do with the several layers of mesmerizing atmospheres; imagine the semi-Oriental female voices in the title track, for example, or the drum patterns that are quite ‘martial’ in execution - and hey, when talking about these military percussion sound: aren’t we talking about a sister-project (the description ‘side-project’ might be too inferior this time, I think) of Herrenvolk / Endoki Forest?... I did mention ‘trancelike’ too, and I’ll tell you why: repetitititititivity. But repetition does not (and I repeat: NOT) mean dullness or boredom. I am rather referring to permanently re-appearing melodies and structures that act as basics to the fabulous creations on Demiurge Technology.

Once in a while the whole turns towards the ‘danceable’ gimmick, but seen the obscure character, I do not think these songs will be part of some left-winged Gothic-playlist in some youngsters’ rave hall. Though, it would be fine if some did (without that left-winged identity in mind, for that would be awkward, even hallucinating – yet then again, quite funny too, wouldn’t it?). Some chapters come with a Techno-alike beat (The Hive, for example, makes me move my neck muscles, and it has nothing to do with head-banging whatsoever this time), then again we have a couple of excerpts that touch the borders of IDM (Descending Storms, though without the possible happiness going on) or ethereal electronics (the track Lumeria is such example, being energetic and expressive at the one hand, and quite dreamy and trancelike at the other).

No matter whether you’re rather into the darkest spheres of Martial or Apocalyptic Industrial alike stuff (and then I am referring to the other projects Faunus is involved with); I think that every ‘fan’ of Dark Electronic Music needs to delve into the deep dungeons of Visoteric’s Electronic Art. I think, but that isn’t but a personal, and totally subjective element (yet since I am the reviewer, and since this is my review, I can add whatever I want), that Demiurge Technology is one of the best creations within this specific trend for quite some time. Just check out the esoteric and post-apocalyptic elegance of Neo Berlin, for instance, and you will understand.