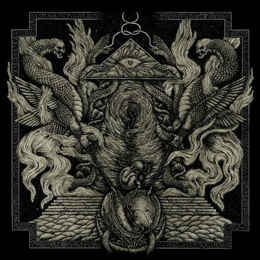 Woodcut released the demo-MCD Grim Death Awaits as an appetizer to this full length (damn, it took very long, too long), but finally we might welcome the first official full length studio album by Finland’s Vorum. I was very pleased with that 2009’s promotional mini-album, so my expectations were high.

And Vorum do not disappoint me with Poisoned Void. The album stands for thirty five minutes of grim, obscure and poisonous Death Metal with a very Scandinavian approach. It’s heavy, oh so heavy, going for both sound (production) as performance, but not one single second it sound over-the-top. The mix could have been done a little better balanced, I guess (the overall sound is too ‘flat’; one might not extricate all details), but it does give the whole a specific Old School spirit, referring to the roots of the Finnish and Swedish scene. Also the American and Dutch Old School scenes come to mind from time to time. Consider Vorum’s lullabies a mixture of Autopsy, Dismember, Asphyx and Convulse and enjoy (or don’t).