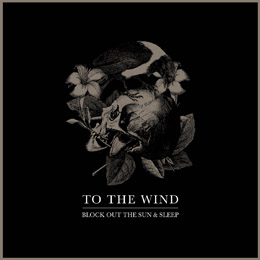 This Melodic Hardcore band from Seattle may be new to me personally, but it certainly is not new to the world, as it was founded back in 2008!

With a current line-up consisting of Tanner and Ryan Murphy (respectively lead singer and guitarist), bassist/ singer Anthony “Tron” Laur (also of Vessels), and drummer Cory Lamb, the band has apparently recently parted ways with their second guitarist Matt Farage (seen as he's no longer mentioned on their facebook page). At any rate, the band made its recorded debut with the 2010 and 2012 EPs Foundations and No More Than This, before dropping their debut full-length Empty Eyes in 2013 (and at this point, you're absolutely justified in accusing me of not having delved out the one of only two info sources I consulted about this band...because I'm in no position to tell you whether the album was already issued through Pure Noise, another label, or by the band itself!).

The new album then, was recorded and engineered in Southern California by producer Kyle Black (whom you might know from previous collaborations with Comeback Kid, Set Your Goals and Stick To Your Guns to name but the most important ones in the music industry). What with the album being released in the middle of the Summer, the band has been ever so lucky to be able to promote it by playing the Kevin Says Stage on the Vans Warped Tour! For the most part of the 11-track album, the songs have a pace which is relatively fast, but interlaced with somewhat slower breakdowns and short passages. The exception on the album comes with the overall slower “Hands Of The Clock”, on which the screamed lead vocals in combination with the somewhat cleaner backing vocals make for an overall Screamo feel, in spite of the somewhat grinding rhythm guitar (at only 3:07 length, it is still the longest track on the album, which has a total length of just under 30 minutes). Another deviation comes with the nice instrumental title track, which for some reason is placed in the middle of the album!

What with the band's own site (www.) tothewindnw.com being down at the moment of checking, the only site on the Internet I found on which some music to be heard happens to be (www.) facebook.com/tothewind, where however only the track “Trapped” (posted as video) actually comes off the current release. Still, it's quite representable for what happens on the album overall (the named exception notwithstanding), and although I haven't had time to actually check, I'm guessing the other songs will be more of the same. Just in case you're on Spotify, I suggest that, if you're into screamed Melodic Hardcore, you certainly check whether the album is available for listening! Those interested in a vinyl copy of the album, contact the label as soon as possible!