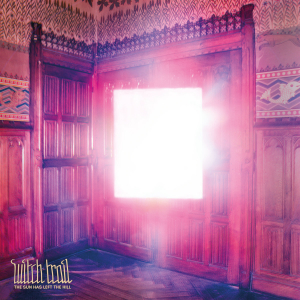 [another older release, but so what???]

Hailing from Ghent, Flanders, Belgium, Witch Trail are an alternative act that was formed in 2012. In the earlier years, they did record and release some EP’s / singles and a split with their French-speaking colleagues from Sepulchral Voices. In 2015 Witch Trail independently released their debut full length Nithera, followed in 2017 by a very interesting EP (Thole). All these things showed an energetic and intensive approach, evolving somehow, reinventing itself as well. And (not that?) recently the band returned with a second full length recording, called The Sun Has Left The Hill.

To release this new recording, and this goes for the compact disc (digipack) and vinyl edition (gatefold 12” LP), Witch Trail signed to Consouling Sounds and Babylon Doom Cult Records (which took care of the release of their former EP, by the way), while Utech Records did focus on the (limited) cassette release. The result is half an hour of alternative Blackened Noise Rock, divided into seven chapters.

No, seriously, what there guys bring is quite characteristic for the label(s) they are on right now; for these ones also are ‘out-of-the-box-thinking’ entities with an extremely open-minded visions. Therefor the release of this newest Witch Trail album is a logical effect. Anyway, it is astonishing how easy it seems to create an own sound, picking aspects from many genres and canalising those that easily and naturally into one magisterial experience / experiment that trespasses the limitations of the contemporary scene(s).

Well, the ingenious creativity (or is it: frenzy acidity?) starts as from opener Sinking. A floating melodic lead opens the game, immediately accompanied by a powerful rhythm section, eclectic rhythm guitars and a soar, wretched throat. Soon, and this goes on every couple of seconds, things smoothly and lightly change and evolve: Krautrock passages, decelerations and accelerations, blasted moments, Sabbathesque fragments, both psychedelic and chaotic approaches, it goes so deep into the psyche of the listener. The many guitar lines combat and the drums rumble, strengthened in their fierce existence by those tormented scream(o)s. Watcher, then again, starts quite slow (which does not mean that it reeks of tranquillity), but not for a long time. Here the link with purely chaotic Black Metal comes to its peak (more than in most other pieces), while the Post-Punk vibe takes over when Stupor gets introduced. Staccato drum patterns, experimental guitars with, indeed, a funky attitude, and mesmerizing bass lines, are canalised into an unusual sonic trip. Rather trippy and psychedelic leads introduce Lucid, a very ‘lucid’ (hehe) piece with a claustro-hypnotic structure, several lunatic breaks and alienated melodies / leads, while Silent Running rather combines the origins of Sludge with dreamlike Groove Rock and LSDoom. The leads after the second half are truly intoxicating, and the ‘grande finale’ of this piece, with those majestic drum patterns, low-tuned stings and hypnotic riffs, is just monumental. Afloat (the lengthiest composition, by the way) then again starts in an acoustic manner (very short), then tranquil, like a cinematic piece for, well, whatever. It breathes the essence of transcendental Post-Rock while combining it with integrity. But suddenly it turns over to morbid dimensions, obscure and abyssal, with different fragments divided into interchanging structures and tempos; doomed then again apocalyptic, melodious versus eclectic. Final piece Residue is like a symbiosis of many of all these details, aspects and elements, with doomy fragments, punkish outbursts, psychedelic-avantgarde experiments and bleak excerpts.

Or in short: The Sun Has Left The Hill is a love-it-or-hate-it release, yet one cannot ignore the troubled identity, which might be mostly attractive, even sensual. This album is a soundtrack for mental disturbance and confusion; addictive pleasure too… I do not see any reason not to recommend this stuff, at least if you’re open for brain damage and paralysing perplexity.

One sad thing, however: I just found out that the band did split up???