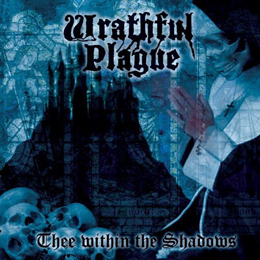 The Salem, Illinois-based project Wrathful Plague was formed almost ten years ago by Nostaum, whom you certainly do know as well from Fecund Betrayal. On November 10th 2014, by the way, Concreteweb did update the review for Fecund Betrayal’s Depths That Buried The Sea, which was released as well via Metallic Media. Anyway, Nostaum recorded this third full length at his home studio, Nost Studio, in Fall 2010, but it took a while, apparently, before he could release it properly (once again it’s with respect and gratitude at Metallic Media’s address to have this material available).

Thee Within The Shadows lasts for forty two minutes and starts with the intro Introit, which is an acoustic melody with nothing special to mention. …little disappointing, I think. But as from Within The Shadows, my opinion changes. Part of the album brings firm and rhythmic, pounding and obscure Black Metal with quite some variation. This first song, for example, consists of different passages, like a fast and militaristic one, a softer acoustic intermezzo with a fine guitar lead, etc. And this goes for most of the stuff on Thee Within The Shadows. Tempo, melody, structure etc., all of them are constantly interchanging, yet still maintaining a specific atmosphere of grimness, darkness, harshness.

But there is something remarkable, and appreciable too. Each Black-oriented composition interchanges with a non-metalized one. Wrathful Plague come up with great dreamy synth-passages too, definable as Cosmic or Minimal Ambient. Transcendence, for example, is such a piece that could easily have been created by one of those splendid Russian acts lately. Also acoustic pieces (intros, intermezzos) are presented gloriously, sometimes sounding neo-folkish, then again integer and introvert, or epic and heroic.

I can imagine some listeners will get sick by the drum programming. I have to mention the mechanical, forced sound, if I want to be honest (and being a mostly objective reviewer I cannot but do so, hehe), so that might be an issue, those unnaturally sounding percussions / drums.

Another remark is the sound, which I think is way too weak and under-produced. The mix is all right, though I think there are elements missed in the sonic mish-mash, especially within the harsher pieces. Sometimes I have the idea this has been created as a hasty collage of individual pieces, without having a specific result in mind. It defines a lack of cohesion, and that’s a pity, because I am sure Nostaun created this act with the best intentions.