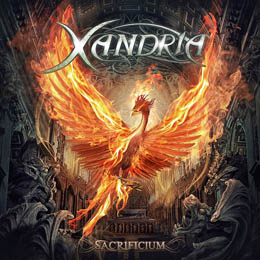 If you like gothic or symphonic metal, then ‘Sacrificium’, the sixth studio album from Xandria is a must have. Despite a change of vocalist, Manuela Kraller has been replaced by Dianne Van Giersbergen who also sings in Ex Libris, who’s Dutch, but no family of Anneke Van Giersbergen. It is clear that Dianne has been inspired by Tarja, and also that founder and composer Marco Heubaum has gotten some inspiration by listening to Nightwish.

Dianne’s voice is of an unheard beauty.  It’s as if she’s singing an opera at times, without being too operatic. They also made use of a  choir PA’dam (who can also be heard on the last Epica album). The opening song on the album, the ten minutes long ‘Sacrificium’ is one of the best tracks on the album, but the other 11 songs aren’t bad either. The last track is a big surprise, it’s a ballad, where Dianne is only accompanied by piano and violin.  Total playing time of the album is over 70 minutes, but with that good a quality of music, and much variation in the songs, it’s over before you know it.