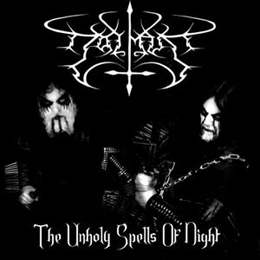 One of the things I do appreciate when talking about Cold Raw Records is the fact that they do re-release many stuff that otherwise never would have the opportunity to reach an audience that might appreciate that material. Several of their releases are demonstrational material, previously released on tape or digitally by the band, or distributed only locally. A couple of examples: Nocturnal Sacrifice, Uluun, Chaos Altar, Milicia Oscura etc.

The very same goes for The Unholy Spells Of Night, an EP that was originally released independently by the duo Zaimus. They hail from Montenegro, which isn’t immediately a ‘big’ country when talking about Metal. But both members involved, Miloš ‘Asmodai’ Klikovac (guitars) and Branko ‘Khamul’ Jugović (vocals, bass, drum programming, synths, production, mix), are veterans within the local scene, being involved with the likes of KK Street Bangers (a well-known Thrash-outfit) or Doom-Death horde Abhoth (on June 7th 2015 we did upload the review for the superior nameless EP, which was released via Satanath Records).

Zaimus is this duo’s blackened outfit, which has its sound and approach rooted within the Second Wave tradition. The material is extremely melodious and supported by hidden layers of keyboard atmospheres (sometimes little inspired by the earliest efforts of Phlebotomized or Sinoath). The main riffing, whether it be fast or slow, goes back to the Nordic supremacy especially, though the whole European scene from the nineties might come to mind, I guess. Coming back to the synth passages: my description said ‘hidden layers’, and this is why: they are not permanently used to act like a foreground instrument, but rather to add some additional feeling of grimness / darkness. Remember the first spells by Gehenna? Well, this is exactly the same approach. Once in a while, however, the synth passages are main melodious as well, but as a matter of fact, those ones, the keyboard lines, are presented almost whole the time, yet mostly dwelling on the background.

Despite not being renewing at all (but who cares), the huge differentiation in speed is, once again, a surplus. What Zaimus bring stays pretty cohesive, no matter if the song, or part of it, is fast and fierce, then again slowly pounding. And despite the use of drum computer, this element does really sound pretty organic, and more natural than mechanical.