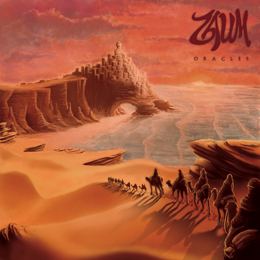 It has been quite a while, but I am glad I Hate did send our headquarters some new stuff at last. I cannot explain why, but their releases almost always please me a lot.

Very recently two experienced Canadian musicians joined forces in order to create something unique, something that would express specific ideas that did not quite fir to the bands these guys currently are involved with. On drums and percussion there’s Christopher Lewis, known from the famous Stoner-act Iron Giant, and his colleague is Shevil’s Kyle Alexander McDonald (vocals, bass, sitar textures [1] and synths, music and lyrics).

[(1): these sitar-sounds are created on a FX-stereo, on which he links his bass and keyboard passages too]

Oracles is the duo’s debut album, recorded, mixed and mastered at Superbob Studios in Autumn 2013, and it deals with their fascination for the Middle-Eastern history (especially the era 300 BC – 600 AD). It was a turbulent period of war and bloodshed, mainly based on religious motives and divinity. This lyrical approach, the hypnotic performance, and the use of sitar-alike sounds, amongst other stuff, made Zaum call their style ‘Middle Eastern Mantra Doom’. And honestly, I cannot agree more. Take the cover artwork for example, and you’ll have a first glimpse of Zaum’s ancient rituals…

Oracles consists of four tracks, which last in between nine and fourteen minutes (the total running time almost clocks fifty minutes). And each of them are a true experience to, eh, experience. This album brings a form of Doom, yet not of the most easy-traditional kind. The whole gets pierced by elements from Arab / Oriental / Indian source, droning Sludge-details, and intricate constructions without uncomfortable exaggeration. There is a lot of Om in it (even vocally), and maybe some Sleep (pre-Om, so it is not that strange), Bong or The Wounded Kings, and even some Teeth Of Lions Rule The Divine, Esoteric, Shevil or Kongh, with a nice balance in between psychedelic mesmerism (those Ravi Shankar-alike sitar sounds are truly psychedelic) and hints of Stoner. The multi-layered and diverse complexity might need some help from Mother Nature (i.e. THC, LSD, or psilocybe substances), but as a matter of fact those compositions are a trip with a comparable result on their own. Needful to mention too is the tempo. The main speed is of the extremely slow kind, but in Peasant Of Parthia the tempo speeds up a little. A little, I said, for this still is Doom in each single aspect.

Despite a certain monotonous and repetitive core, Oracles never, and I repeat: never, bores one single minute. This is the very first collaboration in between these two musicians, but with this record as first try-out, I cannot but impatiently wait for a sophomore album to come. …soon, I hope. I Hate, I love you!

FYI: the tape and CD-version will be released on June 13th, the vinyl-edition on August 29th.