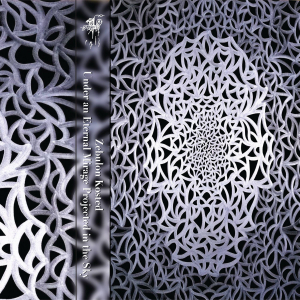 To pass from one plane of existence to another, beyond starless space, through the infinite void…

Rachid Abdel Ghafur is a multi-disciplinary (or better: inter-dimensional) artist, active in both the visual and aural areas of dark-cosmic reality and fantasy; also acting as a channel for social and cultural criticism and awareness. When talking about the visual side of his creativity, I’d like to refer to one of the links below. This guy has a very characteristic style, intriguing and somehow unique; but hey, this review deals with this guy’s main sonic project, i.e. Zebulon Kosted. Rachid is / was active under several other solo monikers, and as part of different line-ups whatsoever, reaching a vast range of styles, like Acoustic, Prog, Experimental, Doom, Ambient, Black Metal, Space Noise (indeed) and so on, but this outfit may be one of his most productive and notorious ones.

Under the wings of Zebulon Kosted, Rachid created and released an almost uncountable number of releases, and this, in the meantime, for more than two decades. Dark Folk, Black Metal, Psybient, Space Drone, Dark Ambient; all these genres smoothly and naturally blend together throughout the open-minded vision of the artist behind, and the very same goes, once again, for this newest two-tracker Under An Eternal Mirage Projected In The Sky; though, I’d rather call it a one-tracker divided into two chapters. Once again, everything was written and performed by Rachid himself (the same goes for the stunning and typifying cover artwork), with studio assistance by Keith R. Szudarski (recording, mix and mastering; Sub Tower studio, which is located in his home city Missoula, Montana) and (once again) Kyle Petrilli (mastering and additional guitar execution). The Germany-based label Ruego took care of the lyrical concept, the graphic design and the physical release (and of course the digital one), which is an extremely limited tape edition.

The experience lasts for about fifty-three minutes, divided, if you want to, in two parts, being Under An Eternal Mirage (24:53) and Projected In The Sky (27:59). The split-up is not that crazy, seen both title’s different aural approaches. I’ll come back to this immediately. As said, the artwork is created by Rashid himself, representing some semi-psychedelic nebula, a concentric construction of mind-twisting elegance and frenzy supremacy. Somehow it does fit to the audible concept.

From textual / conceptual point of view, Zebulon Kosted go deep, really deep. We, the human kind, and our consciousness, our dreams and hopes, our self-created reality of the present and the future, the place of where our existence dwells around within the vast Cosmos, within the unmeasurable dimensions of time and space. Zebulon Kosted makes use of post-poetic thematical literature, like a symphony of words, expressions, lyrical craftsmanship that exceeds the grey masses, that is unique and, at the very same time, so intense, so intrinsically through-going and prophetic. So we join the figure (that figure is like the genuflected and seemingly moaning man-shaped stone statue – Ivan) in its sacred moan, we bury the trees and we bury the stream, for no one can wash away our shame. We cry in the name of our sin. […] Under an eternal mirage projected in the sky, we curl and conceive. But awareness is now an extenuated limb that dissolves and returns to the soil, to settle in cavernous earth – we never expected to undo ourselves across the fabric of creation, far beyond concepts that drove our civilization into a corner. What’s our reality? Which world is ours, which world deserves us – and which world do we deserve?

Anyway, as said, both ‘tracks’ do differ a lot, stylistically, from each other. The album starts with Under An Eternal Mirage. Because of two things, i.e. the length of this piece and the open-minded creativity of the composer, this track permanently evolves and fades back, swirls and drops, rages and decelerates. I am not going to dissect each single couple of minutes, yet a general step-by-step description might give a clue. It starts truly devastating, as from the very beginning, with a nasty expression of primordial and uncompromising Black Metal. Frantic drum patterns, grim screams, raw and rusty strings, discordant noises; this expresses negativity, nihilism and isolationism in an astral framework. Strengthened by an unpolished and rough-edged production, anger, hatred and disgust are united to canalize our frustrations, a critical view on our limits and stupidity of the past, a manifest against humanity’s destructive nature. This fragment of unrefined (yet still it is refined too, talking about the execution) and insolent energy returns afterwards too, within this song, a couple of times, yet being interspersed by sudden breaks and changes that show another sonic angle.

Despite these ‘traditional’ (what’s in a word) excerpts, in stark contrast, several fragments are modernistic and progressive in performance. At about four minutes, for example, things suddenly turn towards an experimental avantgarde approach, first quite focused on intoxicating riffs, then slowing down mercilessly, adding a touch of funereal bleakness and doom.

The ingenious thing is that well-balanced and organically performed mixture of details, elements and concepts from raw Black Metal, Funeral Doom and Experimental Extreme Metal. The progressive fragments are not like in ‘Progressive Metal’, you know, that exaggerated, über-technical and dexterous fake play; no, Zebulon Kosted is technically divergent at moments, yet with inclusion of deep-thought / in-depth elegance and a weird, little devious vision. These tech-laden chapters do return within the blasting parts, yet within the doomed fragments as well, in perfected equilibrium with the core of the ‘orthodox’ approach from the past.

Anyway, Under An Eternal Mirage is a blackened organism, a malicious expression of both craftsmanship and creativity. It trespasses the borders of normality with a modest yet fine-tuned (and therefore acceptable) level of exaggeration somehow, like a collection of coherent yet, at the same time, diverse sonic admittances. A challenge worth being adopted…

The second part, Projected In The Sky, is less ‘adventurous’, which means that there isn’t a permanent interchange in between multi-faceted fragments and sudden changes in structure or tempo. It’s like a slowly waving form of long-form ambience, floating in unphysical form through a grey nebula surreal subconsciousness. Because of its sluggish character, not much seems to occur. But don’t be deluded, for hidden and secret evolutions take place, slowly, invisibly, untouchably. Long-stretched waves float portentously by, deliberately lingering, secretive yet steadfast, static, hypnotic, even claustrophobic. Yet when crossing, or trespassing, the hidden dimensions inside that abstruse enigma, revelations from cosmic power and mystic transcendence, even mesmerizing and intoxicating in nature, float by.

Despite its monotonous and paralyzing character, Projected In The Sky convincingly guides you through infinite spaces and interminable dimensions of self-awareness and assertiveness. The repetitive and withered basic soundscapes get enriched, surreptitiously yet thorough, by cunning and bedazzling yet intriguing aural additions, enriching the audible experience in an open-minded way.

The conclusion is as easy as it is not. Under An Eternal Mirage Projected In The Sky consists of two remarkably differing works that twist and confuse the whole of the time. The stylistic approach is quite the opposite: a harsh Black Metal assault against a minimalistic piece of nihilistic and somewhat serene Drone hypnosis. But the manifest catharsis dwells within the very same ill-omened and airless spheres of eternity, leaving no room to breathe, to recover, to escape, to hide…