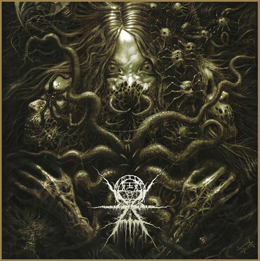 De Masticatione Mortuorum In Tumulis is a true experience for the most daring devils amongst us. Why such a scare-of intro? Well, because this album is Post-Metal beyond all gates of Hell, an after-death journey through abyssal spheres unseen, unheard, unexperienced yet. It consists of eight songs that last for more than an hour (in between five and eleven minutes).

The aural adventure opens with Anno Morti ::: Gnostic Transcendental Heresy, which starts with an industrialized soundscape-alike intro, mechanical and minimal, disturbing and horrific. After two and a half minutes, these tunes of oppression morph into a floating, dreamy keyboard passage, yet slowly building up towards… Apocalypse! Unholy Mother of Earth, all Hell breaks loose at 4:30 with a sonic amalgam of chaotic blasts, down-tuned Death violence, funereal Black Magic and post-occult Sounds from way beyond any abyss! Anno Morti … is a trip into the mostly unexplored profundities of man’s mind, reshaping evident synapsis into shapeless pulp by creating the most vile, obsessive compositions I’ve heard in years! When the next track, Pendulum, omits any chance on normality or inner tranquility by, for example, adding the most mysterious yet intensively haunting keyboard lines, you know this album will infect and corrupt the mind of those who are willing to overt themselves to the purest essence of darkness. I will obey!

It’s this course that dictates the general atmosphere on another excellent I, Voidhanger-masterpiece. The Death Metal riffs balance in between the sleaziest efforts done by acts like Asphyx and Morgoth (when it comes to the slower, heavier passages), or Nocturnus (mind the weird keyboard lines!; also Phlebotomized come to mind!) and Incantation for the sonic noise-beauties, the Doom-laden spasms float in the same hemisphere where Esoteric, Black Wreath or Evoken (listen to the divergent hymn Crematorium Angelicum and share my dreams of despair and frenzy) dwell, the blackened grandeur seems to intercourse with the likes of Blut Aus Nord, Xasthur or Leviathan (and then we come back to the influences absorbed by Matron Thorn), and the psycho-grinding Dark Industrial passages uplift the grandeur of In Slaughter Natives (cf. Hierophant Disposal Facility!!!), Scorn / Godflesh or IRM.

Take the most dingy elements from Woods Of Belial, Impending Doom, Portal, Mitochondrion and Urna, and you might have a clue…