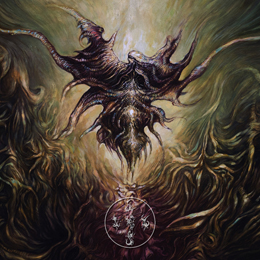 Without any doubt, the duo Ævangelist (multi-instrumentalist, composer, lyricist, producer, engineer and mixer Matron Thorn and vocalist / lyricist / music co-writer / co-engineer Ascaris) created (one of) my absolute 2012-Number One-album (s) De Masticatione Mortuorum In Tumulis (via I, Voidhanger Records). That album did breathe a non-comprehensible and non-definable atmosphere and I haven’t but superlatives to explain my passionate appreciation (check out the review updated on February 23rd 2013). I guess you might understand my horny excitement since I received the sophomore studio recording… The bad news is that the band is not signed to I, Voidhanger anymore, the good news is they did join Debemur Morti’s roster!

This new album, with eight tracks clocking sixty four minutes (!), was completely written, composed, recorded, produced and mastered by the band (read: duo) itself. It starts with the composition (the word ‘song’ would be too denigrating) Veils, which starts with an atmospheric-industrialized introduction, before evolving, after three minutes and a half or so, into a suffocative piece of haunting, funereal and obscure-occult grimness à la Woods Of Belial, Urna, Portal or the likes. Funereal Doom, abyssal Doom-Death, grim and horrid Underground Black and esoteric Dark Ambient get melted into a schizophrenic, asphyxiating and ominous amalgam from beyond the abyss. Noisy and distorted excerpts interfere with atmospheric passages, occult waves of post-transcendental morbidity, and neo-apocalyptic sounds from deep-Earthed and, at the same time, profound-cosmic blast-chaos. The same goes for the following hymns, which bring, in the vein of the debut, that weird, mostly uncomfortable mixture of suffocating and horrific Darkness.