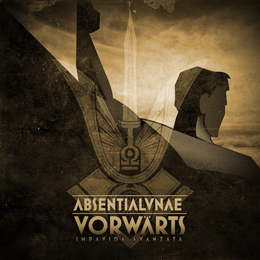 Well well well, I thought this Italian band did split up a couple of years ago, but apparently it wasn’t but a temporary break. That’s fantastic news, but the best thing is: Absentia Lunae return with a new full length studio recording! Actually, Vorwärts (meaning ‘forward’ or something like ‘pay attention, all ahead, march on and don’t let you stop by the enemy’, I guess…) is the band’s third album, once again done by Climaxia and Ildanach (the latter, real name Diego Matejka, is the owner of the ATMF-label, by the way), and helped out this time by experienced drummer Anamnesi - think Simulacro, Vultur, Cold Empire or his self-called solo-outfit.

After more than five years of relative silence, this new album shows a remarkable progression. No, it does not mean that Vorwärts completely differs from what Absentia Lunae did on Historia Nobis Assentietvr, but it surely is a huge step vorwärts indeed, yet without ignoring their initial sound.

What Vorwärts stands for is forty five minutes of highly technical (Post) Black Metal with an unstoppable energy, a monstrous and powerful sound, and a very brutal and dark atmosphere. It seems to be labelled as ‘Martial Futurist Black Metal’ -yeah, whatever- and I do not disagree, you know. Actually, ‘martial’ and ‘futurist’ are pretty much characterising the militant sounds on this album. There is quite some epic pride, warlike malignancy and merciless power that does colour the general atmosphere (strengthened by the magnificent production!), and the technical approach of the performance (including the variety of the play as well as the sublime song writing) show a band / project of quality in all aspects. I think it is a great decision to have Anamnesi doing the drum parts (damn, this human being is skilled and, at the same time, unique in performant presence), but it’s the whole picture that satisfies my senses (once again).

The bio referred to earlier Thorns, Mayhem and DHG, and here too I cannot disagree – I even do adore this arrogance (isn’t that arrogant?). When having Mayhem in mind, the Ordo Ab Chao album surely comes to mind (just listen to Furor Of The Monuments, and you’ll understand what I mean), as well as Grand Declaration of Mind or Chimera (especially as from the second half of the album), and early Thorns for sure might have been of huge influence when it comes to the dissonant structures. But this material goes further than the Norwegian scene only, with more than some ignorant details from the French, Belgian (!), Italian or Polish scenes coming to mind. Don’t just ignore the greatly varying vocal lines either (very Italian): screaming, shouting, swearing, haunting, chanting, crooning, whatever…

Without being ‘avant-garde’, there surely are some progressive elements; without being ‘modern’, there surely are many Post-details at the foreground; and without being ‘blackened’, this stuff absolutely exhales the grotesque sulphuric breathe of the most malignant / malicious Underground Spirit. So take notice, and accept the permanent evolution within dark-aural tradition: Absentia Lunae are the next step to define sonic blackness. And with the quasi Martial-Industrial alike outroduction, there certainly is a specific way to ‘approach’ this great act, I think (or better: ‘I’m sure of’).