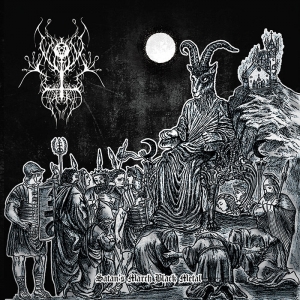 Ad Noctem Funeriis (to my limited knowledge of the Latin language [sorry but I didn’t speak it anymore since about twenty centuries…] this moniker has been misspelled, but who cares about that) are an Italian act that contributed on a split with defunct Italian band Propaganda in 2008, and that released a first album in very early 2009 (…of Evil and Torment, via Salute Records). Then things went silent, but eventually the band entered the studio again in Winter 2014 in order to record their second full length album. The result is called Satan’s March Black Metal and it gets offered by two of my favourite labels from the East of Europe, being Vacula Productions and Satanath Records’ sub-division Symbol Of Domination Productions. The whole was recorded, mixed and mastered at the Kobra Studios in their home country by Andrea Lenoci under this totally renewed line-up: Moloch (g), Eversor (d), Hellhound (v), Tyrannos (g), and Hortern (b).

Satan’s March Black Metal has a total running time of almost forty minutes and opens with an untitled intro, with, for a part, lyrics taken from the great French modernistic poet Charles Baudelaire (so are those on the track Litanie A Satana). It combines somewhat nationalistic chants and neo-classical bombast, and in combination with the evil elements… But this isn’t but the intro, so let’s continue with the rest of the album. And what the rest brings is less pretty indeed!

Satan’s March Black Metal stands for rather fast and energetic Black Metal, mainly rooted in / inspired by the Scandinavian scene about twenty / twenty five years ago. And especially the Swedish scene come to (my) (pretty) mind. Dissection, Dark Funeral, Setherial, Marduk or Thy Primordial are just some names that caress and infect my (superior) brain. Beware!!! This isn’t just a reinterpretation of the Swedish scene, for this band also dwells within spheres courtesy of the Netherlands, Norway, the U.K. and Italy. Anyway, the sound quality is excellent, but it goes further than the quality of the recording studio, because the execution too is of a high quality. I do truly adore the main riffing and the sulphur vocals, but take your time to listen to the rhythm guitars, bass lines and, especially, the fabulous drum patterns! There are several highlights and no disappointments, and despite the lack of originality I am truly convinced, once again…

You know, for one reason or another I am sort of pleased that this is a band that perform the Second Wave trend, yet rather from the Swedish angle than the Norwegian one. I do have nothing at all, evidently, against the Norwegian approach, but since there are hundreds of bands re-interpreting that specific approach… No, seriously, it is a pleasure to enjoy an interpretation of the Swedish old styled current with such great song writing and performance. Therefor I think a positive score might be deserved!