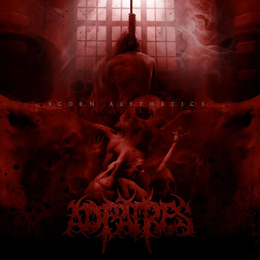 Ad Patres are a French combo that recently signed to Grind / Death label Kaotoxin. As a first result of this collaboration, there will be a re-issue of Scorn Aesthetics. Scorn Aesthetics is an album originally released in 2012 on CD, and it will be available right now on vinyl (limited to 500 copies only, amongst which half of them on red vinyl) and on cassette (limited to 100 copies), albeit remastered. The album was very well received in the band’s home country, and maybe it will get some promotion / attention outside as well?

Anyway, the album was produced at the Bud Studio with Mathieu Pascal (of Gorod-fame), and the drum parts were played by one of France’s most notorious drummers, and one of the founding members of this band, Yannick ‘Alsvid’ Herrera (think: Enthroned, Seth, Griffar, Goatlord Corp., Morning Rise and many others). It lasts for thirty five minutes, with inclusion of the bonus material, taken from the 2010-demo.

Ad Patres’ Death Metal is of the Grind-edged kind, old fashioned and technical, blasting and heavily influenced by the Polish scene, I think. More than once I must think about the likes of Decapitated, Hate, Behemoth, Calm Hatchery or Yattering, as well as non-Polish acts like Suffocation, Nile, Yyrkoon, Krisiun or Sinister, to name but a few. This might give you an idea of what this album stands for. I certainly do not dislike the effort, but personally I can’t find any positive value. On the contrary, this album sound like an amalgam of higher mentioned bands, but then again a collection of tracks that didn’t really made it to an official record. No, Scorn Aesthetics is not a bad or boring album, but it’s just beneath average for giving nothing ‘more’ at all.

FYI: in the near future, there will be an official video clip for the title track…