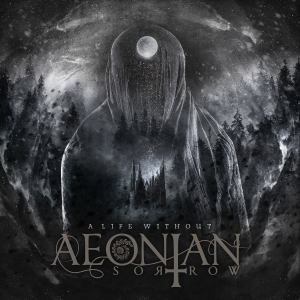 The Greek band Aeonian Sorrow was formed almost five years ago by (beautiful) singer Gogo Malone, whom you might know from Gothic Death Metal act Luna Obscura. She started this outfit to have her own ideas canalised into own songs, and soon she got accompanied by other (talented) musicians from Greece, Colombia and Finland. In very early Spring 2018, Aeonian Sorrow independently released their debut album, Into The Eternity A Moment We Are, first digitally and on CD, later repressed on compact disc once more and on vinyl too.

After that release, some line-up changes took place, but it didn’t stop the band from touring (with e.g. Swallow The Sun and Oceans Of Slumber), nor from writing and composing new material either. Stronger than ever before, the band entered the Finnish Deep Noise Studio to record the instrumental parts and the harsh vocals, while Gogo’s vocals got recorded in Greece (STV Studio), and the drum parts in the United Kingdom (for the band’s new drummer is no one else but Clouds / Pantheist / Eye Of Solitude / Shape Of Despair / … drummer Daniel Neagoe, by the way). The result got eventually mixed and mastered at the Deep Noise Studio by former drummer Saku Moilanen (also in Red Moon Architect, which shares several members with Aeonian Sorrow). Besides a digipack edition, there is a very limited boxed set too, for those who might be interested.

A Life Without consists of four new tracks, and it gets filed as an EP. However, the total running time clocks almost thirty-six minutes, which isn’t exactly a mini-album – but that’s a discussion of no importance. The concept deals with ‘life in darkness’, a life without love, without passion, without compassion. The meaninglessness of being, nostalgia and melancholy, a life in pain, in emptiness, in isolation, in grief and in loneliness - all these subjects might refer to ‘a life without’. Well-chosen title!

From sonic point of view, A Life Without goes on where the former material ended; going on, following the same path, and further. The main structures still are based around melody and atmosphere, with a huge dose of variation. This is Doom Metal rooted in traditional spheres, touching the borders of both the Funeral scene as well as the Gothic one. But it is certainly not from the so-called ‘female fronted’ kind, nor is it poppy or fake-romantic. …at all…

Actually, despite the traditional approach, this stuff is rich because of the quality of song writing, the great performance of the members involved, the decent sound quality, and that variation I already mentioned. When talking about the latter, this goes for the tempo, as well as the many differences in structure and the huge use of diversified instruments. That tempo, well, Aeonian Sorrow do play Doom Death Metal, so do not expect fast or up-tempo excerpts. But there is variety in speed, going from totally doomed over slow to mid-tempo. The changes in speed are well-thought and finely balanced, not sudden or unexpected yet not predictable either. Besides, there is much to experience, and seen the fact that these four tracks are quite lengthy, this variation in structure and melody is more than coincidental. Chapters based on pounding heaviness interfere with dreamlike ones, funereal parts are interwoven with piano-led intermezzi; some sections are guitar-based, with floating tremolo or twin riffing, while others rather dwell in mesmerizing and / or spiritual regions, introspective, integer, intimate.

A unique thing is the organic symbiosis of different angles involved. As said, Aeonian Sorrow perform more than ‘just’ Doom (Death) Metal. Okay, the foundations refer to the earlier Nineties, when powerful structures and emotional atmospheres got canalised into a universe of both realism and instinct. But it seems so easy, so natural, to inject details from Funeral-oriented grandeur once in a while. Okay, the main parts are not Funeral Doom oriented, but listen for example to a few parts in My Solitude, or the opening sequence of One Love, and you’ll notice the funereal aspects. Also the link with the more Gothic-oriented scene gets performed with such finely-detailed craftsmanship, without fading away into some catchy Goth-Rock thing, based on fake drama or false romanticism. On the contrary; this band uses those elements that enrich the whole - an example: the first half of Hopeless Suicide, with for instance that beautiful passage based on a catching piano melody and the clear voice of Gogo.

This easily brings me to another characteristic aspect of Aeonian Sorrow: the vocal contributions. At the one hand, you have the deep, growling, even ‘rumbling’ throat of Ville Rutanen (Red Moon Architect, ex-The Final Harvest) (I think his grunts are even harsher and more clamorous than those of the band’s first singer), which accords extremely well with the warm yet sorrowful vocals of Gogo. The latter does not sing the so-called ‘operatic’ way, whereby it fits more intensively to the total concept. Besides, there are a couple of cleaner passages and even some blackened screams, well hidden yet subtly darkening those passages when used.

A last word about the sound quality, which is another grandiose thing too within the story called A Life Without. Okay, Saku Moilanen did some great things in the past before as producer / mixer / master (think: Wolfheart, Red Moon Architect, Crimson Sun, Black Sun Aeon, RoutaSielu etc.), but here he surpasses all former efforts. The mix is very decent, with an impeccable equilibrium in between all instruments and voices. All strings, vocals, percussions and synths / piano are clearly audible, shaping a coherent entirety. But the is a certain roughness too within the sound, which intensifies the depressing, gloomy, sombre, dreary mood.

Hey, what a contrast: lots of positivism written down here, which is the full opposite of Aeonian Sorrow’s message: wrath, tragedy, anguish, hopelessness, loss, the lack of joie de vivre and the lack of hope, light and joy.