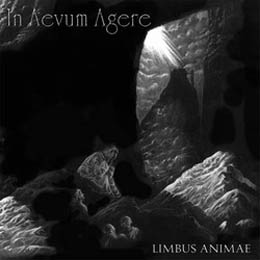 In Aevum Agere will celebrate their tenth anniversary in 2015, but despite ten years of activity, these Italians haven’t released that much yet. In 2012 we could enjoy their full length debut, The Shadow Tower (which was also released via Germany’s Pure Steel Records), and now the quartet (drummer Fabio Parisi, vocalist / guitarist Bruno Masulli, bass player Piersabato Gambino, and guitar player Marcello D’Anna) releases the Limbus Animae-EP, which lasts for twenty two minutes.

With their former recording (the debut full release), In Aevum Agere showed their passion for Kult-Doom acts such as Candlemass, Solitude Aeternus or Memento Mori. Well, actually this has not changed. As from the opening riff of the first track, Awaiting, the Candlemass-passion is oh so clear. Even the vocals remind me a lot to these Swedes (cf. Robert Lowe). One of the few differences are the extremely heavy solos, but sound and atmosphere aren’t but pretty much the same. And oh yes, what to think about a cover, namely (and please don’t fear): Solitude. Got it now?

Oh yes, more than once I read about ‘Power Metal’, but what the f*ck??? There is no Power Metal influence whatsoever within In Aevum Agere’s Epic Doom. With a song like Anti-Inferno / Limbus Animae I wouldn’t be shocked to see a comparison to NWOBHM, but Power Metal? Thanks, but no thanks.