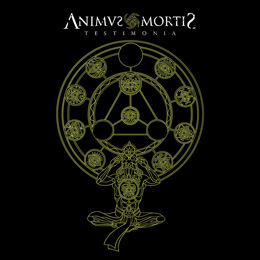 About one decade ago, Nicholas Onfray (think also: Black Moon, Ruined Sanctuary, Horns, The Last Knell etc.) formed the outfit Animus Mortis. He joined forces with vocalist Sid, and as a duo they recorded the demonstrational recording, called Desolate Landscapes. Soon after, there was a mini-album too (Thresholds Of Insanity), followed by a first full length, called Atrabilis, in very early 2008 (released once again via the great Debemur Morti-roster). Some splits and many live performances did follow, and now it’s time to recognize this band’s strength by means of the second full length, Testimonia, which has a total running time of forty minutes.

Testimonia opens with REM Manifesto, which starts with quite a weird introduction, being an eerie, buzzing sound joined by some bells. But after about forty seconds, the whole play turns the heavier way, focusing on a melodious and somewhat sludgy, little grooving and modern form of Atmospheric Black Metal. When the vocals join in, I am truly impressed, for these ones, at this point, are not of the grunting or screaming kind, yet harmonious (and somewhat inferior to the instruments, but that might be the result of the mix???). This opening piece remains the same, yet at the same time it builds up, catching the listener’s ear (and brain). With the next track, Seven Decress, the band points its statement. Highly melodious lead riffing, a massive wall of rhythm (artillery drum patterns and powerful chords / strings), and diverse vocals (grunts, screams, yells and melodic voices) are melt together into a rather oppressive, even disturbing expression of Post-laden (Black) Metal, trespassing the borders of normality and acceptance. It might sound little confusing at first, but after a couple of turns the whole picture reveals itself before the listener’s ‘mental eyes’ (I know this sounds stupid, but how would you describe this approach? …indeed, I thought so; apologies accepted…).

Great too is the variation. Sometimes the whole is of the repetitive kind, then again atmospheric, blasting and / or progressive. I mentioned the balance in between melody and bestiality, and sometimes that gets truly expressed through compositions like the (short) title track, a piece that combines every element that characterizes this Chilean act.

The biography refers to the likes of early Thorns, Deathspell Omega and Spektr. I think that’s a rather accurate comparison from time to time, but I would like to add the likes of label-mates Absentia Lunae, Disiplin, or Blut Aus Nord, Spite Extreme Wing and Thaw (without the Hammer-Sludge elements), as well as (later) Mayhem or DHG at the other.