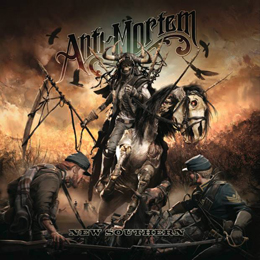 After 1 single in 2013 “Words Of Wisdom” and one in 2014 “100% Pure American Rage” their first album “New Southern”. The album includes the 2 singels. This album is a killer with soma awesome guitar and great songs! First song “Words Of Wisdom” is a preview of what is going to happen on this album. A straight song with feeling and passion, great guitar riffs and a great raw voice.  Second on the album “New Southern” Title track First a play with voice and a strait guitar riff always returning but sounds so good that I like it! Sixth song my favorite only for this song you must buy this album “I Get Along With Te Devil” What a kick drum with a kicking ass chorus “I get along with the devil. Yeah!!! I get along … but I hate the mother fucker” can you explain it better than this sentence. And than one place eleven “Truck Stop Special” a southern American typical style intro. These guys are the best future metal band, with some nice riffs and balls. Just buy this record it will not disappoint you. I almost forget this nice cover!