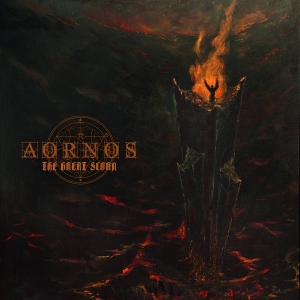 The name ‘Aornos’ comes from a fortress in contemporary Pakistan, more or less ‘close’ to the Himalayan mountains and the Indus river. It was a fortified site known for the passing of Alexander the Great and his final siege (or at least one of the latest ones), some centuries before our modern era. It is the moniker as well for a productive outfit by Tatrai ‘Algras’ Csaba, a Hungarian multi-instrumentalist who is member of Frost too, and who used to be in bands like Carcharoth and Bornholm. The first official Aornos album was Orior in late Summer 2015, which also was the project’s debut for Symbol Of Domination Productions (http://www.concreteweb.be/reviews/aornos). Shortly after, a digitally self-released EP, with cover tracks especially, appeared, followed in 2016 by a second SODP-release, Mors Sola (I can’t find my review anymore, unfortunately). A second digital cover-filled recording got distributed via the project’s Bandcamp page in 2017 (From The Deep), and in early Spring this year, Fekete Terror Productions release a split-tape with fellow-countrymen De Profundis. That very same label, by the way, re-released all former material on cassette in a box-set. Now it is time to embrace the third (physical) album.

This new piece is called The Great Scorn, printed in 500 copies and available via Symbol Of Domination Productions in a partnership with Italy’s Ira Aeterna, The True Plague from the U.S., and a new American label called Black Metal Records. it was totally written, performed for the better part (*), and produced by Algras himself. Everything was recorded, mixed and mastered during 2017 (Winter - Spring - Summer), and the nine tracks, with English titles and lyrics (not that common in Hungary; appended to the three-folded booklet) have a total running time of just over three quarters of an hour.

(*) S of Svoid did the vocals on Trace To Beckoning Fade, for which he wrote the lyrics as well.

Algras did never hide his adoration for cult bands and classic albums from the so-called Second Wave period. His former recordings did not exactly show a renewing vision, but proved his appreciation for the scene that did put ‘Black Metal’ on a pervious level. So, once again you do not need to look after originality. But f*ck originality. Aornos may not reinvent hot water or a round wheel, but his tribute to the origins of the scene is highly qualitative for sure. Fast versus slow (with doomy passages and eruptional blasts) including the well-performed sudden breaks and changes in tempo, ‘Orthodox’ riffs, traditional (maybe predictable too) song structures, atmospheric passages, epic moments, and so on – everything is present. Yet as said, since the song writing and performance are top-notch, I totally ignore the lack of originality.

Actually, despite lacking a progressive injection, Aornos somehow gathers so many inspirational elements from, well, Satyricon, Emperor, you know, and Algras makes his own interpretation of all this majesty. The hypnotic leads come with a fierce yet proud, convinced attitude, the variation in vocal timbre is a surplus, the additional keyboards add a fine aural bonus, and so on. Besides, the average quality, as mentioned before, is truly high, and there is not one single moment that bores or annoys. On top of it, I must say that the full, heavy, bombastic sound strengthens the whole concept, the whole experience. And the variety, in between the tracks and within every single composition, is another surplus too.