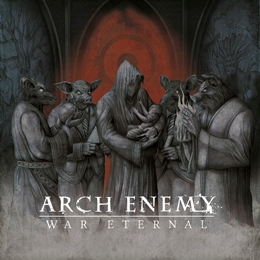 Many fans were shocked with the announcement that long- time frontwoman ‘Angela Gossow’ would quit the band. But ‘Alissa White- Gluz’ is definetly a good replacement as wel as front- woman and vocalist, she has it all.

It’s also the first album for former ‘Arsis’ guitarist ‘Nick Cordle’ he replaces ‘Michaels’ younger brother ‘Christopher Ammot’ since he left the band in 2012. fans are always reluctant to change in line-up, but in this case they have nothing to fear; in my opinion: ‘Arch Enemy’ is stronger than ever and ‘War Eternal’ is the best album they’ve put out in years.

The album begins with an intro in F- minor witch gives it a medieval touch.

As soon as the intro is over ‘Alissa’ begins with a deafening scream that immediately throws away all the doubts of whether she can compete with Angela’s voice or not. ‘Never Forgive, Never Forget’ has some catchy riffs and very fast drumparts in it.

The songs that really stick are: ‘You Will Know My name’, ‘On and On’ with a chorus that is easy to sing along with and the double solo work of ‘Amott’ and ‘Cordle’ witch completes the song. They end the album with a instrumental song witch I find very unfortionate because it’s a very slow song and it’s a bit repetitive... Nevertheless a great album (but not their best)