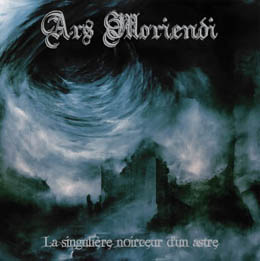 Ars Moriendi are a solo-project by Bastien ‘Arsonist’ Mailhot, whom you might know from, for example, Rein, Solipsis or Notre Amertume (so this has nothing to do with the same-named act from Lithuania nor the one from Austria; and maybe, who knows, there are others with the very same moniker?...). There were a handful of demonstrational recordings during the first half of this century, and Ars Moriendi also released two extremely strong albums too, L’Oppression Du Rien (2008) and Du Tréfonds D’Un Être (2011, released on the current label, Ukrainian Archaic Sound). Apparently there was a split as well a couple of years ago, with Notre Amertume, a duo with Arsonist doing the vocal parts.

La Singulière Noirceur D’un Astre consists of five anti-predictable aural creations that last in between eight and twelve minutes. Despite the long average duration, however, each single composition stands for something pretty well-thought. There is a Black Metal basement for sure, but forget the traditional characteristics, for Ars Moriendi cross each single border, trespass each single limitation. The songs are mixed with elements from any other existing musical genre (slightly exaggerated, of course, yet still…), and the technical approach betrays a passion for the execution of progressive ideas and intentions. It means modernism for sure, yet without forgetting the roots. Brings me to the keyword of this album: variety! There is an enormous differentiation in all aspects concerned: tempo, melodies and song structure, vocal lines, atmosphere, the influences from other musical angles (including sampling and oriental elements, a.o.), and the use of instruments like acoustic guitars and synths; only the production is a constant. And when it comes to the latter, well, the sound is not superb, but it does satisfy my eardrums with pleasure.

The biography I received mentioned a hybrid of Oranssi Pazuzu and Agalloch ‘and that’s just the tip of the iceberg’. I do not disagree at all; I think it is a mostly fitting comparison. Personally I would add a name like Rhymes Of Destruction too, but since this recording has so many angles, there might be an unlimited list with comparisons, and still none will totally fit.

Beware, for this album is not an easy-to-digest creation. No, it certainly is not. You might need some time (read: listen to it over and over again), and even after five turns you might not grab the multi-faceted package yet. There are so many levels, you see. But grant it with the veil of time and who known, you might start to like it.