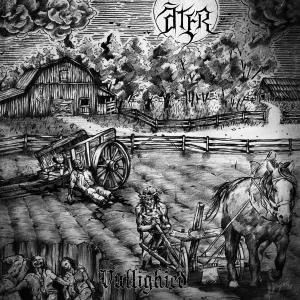 The Flemish artist Wesley Beernaert might not be that known (not yet!), but there is quite a big possibility that you have heard him ‘singing’ before. He has been doing vocals for Lemuria for several years, for the international act Fabulae Dramatis (worth checking out if you can appreciate a more progressive approach!), for Satyrus (also an important name within the Flemish underground scene), for September Syn, or for Persephone’s Blade (with former members of e.g. Axamenta, Ancient Rites and Ars Veneficium). Besides, he is (was?) quite active too as live vocalist for many bands during their tours. However, he started an own outfit two decades ago, called Āter, which had not been that active yet. But now things will change for sure.

Āter had never been put to rest officially, but it took an eternity before a first official release saw the unlight. There were some recording sessions about fifteen years ago, done with session guitarist Mantorok (real name unknown, for he prefers staying sort of anonymous). Then a drama happened, because due to a malignant curse by some nasty weather gods, these recorded things got lost. Fortunately, Wesley did decide to keep his personal outfit alive. He was able to recover some older stuff, re-recorded and remastered it, and now, finally, we can enjoy this first officially released material. It is self-released via digital sources (see this guy’s Bandcamp-page: https://atermadness.bandcamp.com/releases), and there might be a physical edition in the future as well.

First a word about the cover artwork: it says a lot! It is directly connected to the lyrical theme, with those texts written (and ‘sung’) in a very old local dialect. The title, for example, Vullighied, means ‘vuiligheid’ in contemporary Flemish, or ‘dirt’, ‘filth’. And the lyrical content too delves into the dirtiest pits of human life: prostitution to gain money to feed your kids, pathetic struggling of regionally centered populations, jobs no one else wants to do, hehe… Very in-depth and making you think about the relativity of human life.

The sonic side pays tribute to the Old School for sure, with a certain Nordic-styled approach. Āter bring that kind of Black Metal that made me fall in love with this scene many decades ago. This goes for both the song writing and performance, as well as the sound. When talking about the latter, well, you like it or you do not. But hey, it brings forth the essence of the origins of the scene. The sound quality is enormously raw, rough, unpolished and lo-fi, yet it is not, and I repeat: not (!), under-produced. Yes, this is how the first underground recordings did sound like three decades ago. Darkthrone, Gorgoroth, Satyricon, Burzum (hey, I accidently had nothing but Norwegian bands in mind – it does say a lot about the approach, does it not?!), yet also Samael, Throne Of Ahaz, Octinomos – you got the picture? – all of them came up with a production that stood miles away from clinical decency. This kind of material is allergic to a surgically clean sound, as you know. And what’s more, despite the roughness, the mix is well-balanced too. There are no irritating background noises, and all instruments are audibly equally represented. The leading riffs and vocals are properly supported by the whole rhythm section.

The four original (and re-recorded) tracks are pretty fast and melodic. The melodies come with an epic touch, once again referring to the Nordic-styled basics from the Second Wave’s earliest years. Okay, it does not make this material sound ‘original’, but who cares about a renewing approach when the result is more or less as convincing as the initial  stuff. Indeed, I thought so. The pieces are strongly guitar-oriented, with mesmerizing and, as said, quite epic guitar melodies as guideline. In some way, and despite the harsh texts, there is some heroism going on. The rhythm section, then again, gives the whole that heavily punishing attitude, that harsh, energetic and malignant approach. This combination, epic-victorious versus harsh and energetic, sound like an everlasting marriage. The main vocals, then again, are very deep, gurgling, sulphuric and even hoarse (which must not be seen as something negative!). as said, Wesley is an experienced vocalist, but his timbre surely fits to the whole package. It strengthens that old styled approach even more. And to continue this statement, what about the clean and melodic voice (cf. Valkennacht)?

The fifth track (Diatomaceous Ooze) is a bonus one, not recovered from the original recording sessions. And hey, it differs totally from the four other tracks. Apparently, it sort has been written by Satyrus, i.e. that both music and lyrics were written by some former colleagues from Wesley in Satyrus. Yet it has been performed by Wesley and nobody else. I’d rather describe this experiment as some blackened Horror Death Metal piece, with very varying voices (abyssal deep grunts, hysterical screams and much more), and those weird synths, rather reminding me of bands like Tartaros or Morgul. It is strange, and disturbing, to hear this track after that right-in-the-face approach of the first songs, but as a bonus, I do appreciate it a lot.

Āter had evolved into a ‘real band’, in the meantime, including (former / current) members of e.g. Gotmoor and Anwynn, and the band will start playing live and recording new material. Watch out, people!