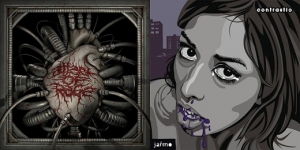 Attack Of Rage hail from Slovakia and were formed in 2001 as a quartet under the name of The Chliew. In 2005 and 2006, already as Attack Of Rage, they send out two promotional recordings, which eventually resulted in a contract with Czech Grind / Death label Grodhaisn, which released the band’s debut, the mini-album Grindpeace, in 2007. After a while, a period with some line-up changes, Attack Of Rage were able to sign to Metal Age Productions, located in their home country, and they released a second mini-album, Svate Slo, in 2011. And it is clear these guys do take their time, for it took another three years before they do release some new material, this time in collaboration with Czech colleagues Contrastic.

Anyway, Attack Of Rage take care of Side A of this split-LP, with five lullabies that are not about to be stopped. The Grind / Death assaults are crusty and dirty, with hints of earlier Dying Fetus, Ingraved, Misery Index and Suffocation, yet all this transformed into a headstrong vision. What I find very positive are the great structural constructions and the excellent sound of the instruments. When it comes to the latter, the sound, I need to mention the massiveness, but also the lack of clinical decency is just fine. Despite the sometimes evident, and even predictable, totality, this effort is more than just acceptable. 7,5/10

Contrastic are a pretty ‘old’ band from the Czech Republic, originally formed in 1993. They did release several splits before splitting up, with acts like Fleshless, Deaf & Dumb, Ingrowing and Imperial Foeticide. In 2000 there was an untitled studio album as well, which was received extremely positive all over our rotten globe, but still the band decided to split up. However, some of the guys went on with a new band, called Opitz, and suddenly they understood that quitting Contrastic was a stupid idea. Enter 2012, Contrastic reformed.

The guys went to the studio and recorded material for an EP, called Jařmo, which was self-released on June 1st 2014. It’s this material that also appears on the split with Slovakian act Attack Of Rage. Jařmo brings a hybrid of d-beated Punk and old schooled Grindcore, fused with elements from Funk, Electro, Jazz, Industrial, sampling and ethnic stuff. It’s weird, it’s unusual, it’s extremely refreshing as well. This is one of those bands that make the Grind-scene borderless in possible limitations. And truly each single ‘song’ is an experimental and mostly crazy-as-f*ck piece of total madness, but it does refresh the scene. Grindcore seemed to be dead a couple of months ago, yet nowadays there are some releases that are so enormously reinventing the scene, and Contrastic created one of them. A proud middle finger in the ass of ignorant humanity, I like it! 8/10