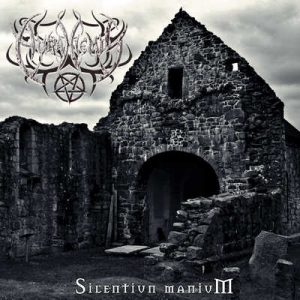 Felipe ‘Herumor’ V. is quite a known grunter within the Chilean Underground Death Metal scene. He has been, or still is, active in acts such as Projector, Mar De Grises (I truly adore this band!), Ancestral, Abaddon and Timecode. His main project, however, is his solo-outfit Aura Hiemis, which he started in 2004. Solo, yet with guest and session musicians… Throughout the years, Aura Hiemis did record and release three full lengths, an EP and a fabulous split with Ego Depths and Sculptor (also via Endless Winter, by the way). And yes, there was a compilation too…

Anyway, the project returns with its fourth full length studio album, called Silentium maniuM, almost five years after fiVe (which was, once again, and just like the one this review deals with, released via one of those great Russian based Doom-oriented labels, Endless Winter). Most material was recorded by Felipe aka V in late Summer / early Autumn 2016 at The Tower Studio, with assistance of drummer / string wizard Lord Mashit (think e.g. Vinter, Throne Of Evil, Failure, Nocturnal Delirium). The result was mix and mastered as from late 2016 at the Black Sun Studio with Camilo Gomez, known from e.g. Projector. The compact disc is a jewel case edition with a sober yet informative four-page booklet (no lyrics included).

Silentium maniuM brings almost three quarters of an hour of funereal and atmospheric Doom-Death Metal with a timeless and universal approach. Yes, I hear you say: not original in consequence? Indeed, that’s true; but as I did mention in many reviews that deal with this specific kind of Aural Art, being Doom-Death Metal in general, including all its sub-genres or related scenes, originality, progression and eccentricity are superfluous, even superficial and unwanted. Or better, at least this counts as long as the result is satisfying, equalling the high qualitative level of those bands that did already enter the worldwide scene before. Well, let’s say that Aura Hiemis is one of those bands that surely comes close to the purity and inner strength of the scene, despite the many clichés and evident passages. F*ck trying to be original when you can create the better things that are rooted in the essence of Aural Art!

This element gets clear as from the opening introduction, Maeror Demens I. It’s an instrumental piece, based on an electric and an acoustic guitar riff – nothing more than that, actually. But immediately it drenches the listener in that specific dimension of melancho-melodic majesty in the vein of, well, ‘the true scene’. FYI: there are several Maeror Tremens interludes, all of them being an acoustic or semi-acoustic chapter, limited in length, in between the mighty hymns on the album. You like it, you appreciate it, or you do not – that’s up to you. But do not forget that this is part of the concept.

[PS: ‘maeror demens’ are a bundle of poems, written in 2015 by Leonor Dinamarca, a (pretty) poet / painter and prof / master from Chile; her poems did inspire this album’s lyrical concept, but unfortunately the lyrics have not been included in the sober four-page booklet]

The other tracks, the ‘real’ songs, are like the essence of funereally inspired Doom-Death Metal. You have those colossal rhythm section, with ultra-heavy riffs and a massive rhythm support, including harsh guitar lines, excellent basses and pounding, somewhat punishing drums. All this gets brightened by hypnotic and / or melancholic and / or prominent guitar leads, twin tremolo riffing and solo guitar melodies. It is remarkable how firm the importance of those guitar leads are, yet at least as remarkable to notice the grandiose equilibrium in between those leading patterns and the supporting background structures of the rhythm section. Besides, everything gets smoothly and smartly endarkened by elegant synths. These ones are, most of the time, almost unnoticeable, yet of undeniable importance, despite their subtle presence. The vocals, then again, limited in presence, are not as deeply growling, maybe quite in contrast to what you might be trusted with, yet rather wretched and hoarse.

All compositions – the Maeror Demens interludes not included – though Between Silent Seas and Frozen Memories are comparable to those intermezzi – have a certain old styled funereal attitude, especially within the slowest excerpts (not that there is any ‘up-tempo’ piece), characterised by the mesmerizing keyboard lines and dreamy guitar leads. In a sense, there’s a destructive brutality behind the concept, though from self-destructive and grieving point of view, rather than expressed in terms of external hatred or disgust. I prefer those pieces, though being limited in presence, but that isn’t but a personal, and therefor subjective, opinion. Yet seen their intensity and inspirational subtlety, one cannot ignore the marvellous elegance.