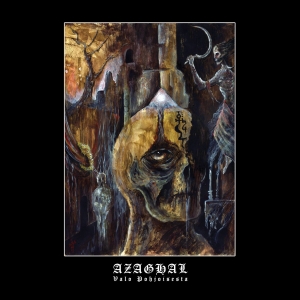 I do not think that Azaghal do need an extended introduction, so I’ll keep it brief. This Finnish horde started in 1995, first as Belfogor, then under the Nargoventor-moniker, and under their current name they dwell around as from 1998. Throughout the years, the band recorded and released quite some material, with a couple of absolute highlights included. Two of their latest releases were split-collaborations (with country-fellowmen of Oath and Belgium’s finest Ars Veneficium; both of them have been reviewed, evidently, with pride and honour by yours truly, so check these reviews out, if wanted, by entering something, anything, as long as it is relevant, in the ‘search’-tab), released via Belgian Black Metal label Immortal Frost Productions. It’s the very same label that now comes up with another full length by Azaghal, called Valo Pohjoisesta. And FYI, in case you come from another planet, or if you woke up from an eternal coma only recently: the label is run by the same guy behind Ars Veneficium, which Azaghal co-operated with before, as mentioned.

Valo Pohjoisesta means something like ‘Northern Light’, and it gets released on compact disc (a normal edition of 1,000 copies, and a limited digipack version), on vinyl (12” LP, different versions) and via digital sources, all via Immortal Frost Productions; and there seems to be a limited tape edition too in the meantime, via a Malaysian label, Goatlordth Records. Not that unusual when talking about the Flemish label involved, yet the cover art (digipack) and lay-out were taken care of by German graphic designer Moornebheym; the ‘normal’ artwork by Nether Temple Design from the Russian Federation.

This album was written and recorded by multi-instrumentalists Narqath (Tomi Kalliola; original member) and Niflungr (Kai Karpinmaa) and drummer Lima (Joonas Pykälä-aho), all three of them notorious names within the Finnish (Black) Metal scene for sure. The result is a forty-six minutes journey through the darkest realms, courtesy of Azaghal, even more enthralling and arousing as ever before. And what you’ll experience (I hope you do) is the logical result of two decades + of increasing craftsmanship. Former member JL Nokturnal appears with some solos / leads (on three tracks) – FYI.

The album opens with a fine intro (VLE), which is both ‘beautiful’ in a sense of symphonic atmosphere, as well as ominous and gloomy. In a cinematic way, this piece introduces a horrifying story to come, created with orchestral bombast and theatrical drama. But the real ‘stuff’ comes as from Mato Joka Sinut Turmelee. It starts somewhat slow and integer, yet soon the excellence of these Finns, when talking about the creation of sonic terror, shows its scarred face. Melodious riffs and epic leads are supported by a monumental rhythm section and truly grim vocals. Fast outbursts in a Scandinavian vein interact with some slower excerpts, done with an organic nature.

I have no favourite track on, this album, for every single composition has that little ‘extra’ that makes this band so adorable. Yes, adorable these guys indeed, haha. No, seriously. Each piece comes with something that is just showing the experience and craftsmanship of the members. The intriguing riffs, the cool changes in tempo or melody, the additional vocals (grunts and epic chants), the (duelling) solos, the blasting drum salvos, the thrashing outbursts, whatever, Valo Pohjoisesta has been written and performed with eye for detail, and a huge amount of professionalism. The ingeniously performed epic riffs in Sielujen Yössä, the breaks in Ajaton or AIWASS, the diabolic character of tracks like the title song or Ylistys, the surprising intro for the last track (created, by the way, by V-Khaoz, who is no stranger to either the band nor the label)  and so on; every single piece has something to offer that intrigues, captures, enthrals…

The production too is top-notch. At the one hand, the buzzing sound is massive and powerful, even overwhelming, with that necessary amount of chaotic rawness. Polished indeed, yet not clinically polished – the way I like it, the way it needs to be. The mix of all instruments (the hateful, hostile vocals are considered an instrument too) is so perfectly balanced, and whether it deals with a leading thing or a supporting rhythm instrument, all elements are nicely and equally proportioned. Excellent bass riffs, guitar leads, drum salvos, and so on – all is so ingeniously mixed into the whole ‘package’. The result is an expression of cold, eerie spheres, which the whole aural attack dwells in.

In conclusion I can say (or better: write, because when I say it, you won’t hear it) that this album is another crushing, thunderous, yet magnificent collection by Azaghal. There is quite some variety, yet permanently done with cohesive attention, and the result exhales an epic atmosphere, more than once before. Do not expect something unconventional, renewing or original – why should you anyway – yet prepare for a skull-crushing monument from Finnish soil.

PS: there is an official video available for the title track.