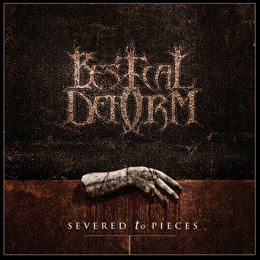 One of Russia’s oldest Death Metal acts for sure is this one: Bestial Deform, created in 1990 and still active. There was an official break for a couple of years at the end of last century, and the past decade there was nearly anything going on (the last album, Stop The Christianity!, was released in 2005). But since I do consider Bestial Deform as one of the strongest and most influential Death Metal acts from Russia, I am truly pleased by the band’s return.

Severed To Pieces is a two-tracker, conceived by Kirill Ulanenkov (v, g), Anton ‘Algor’ Fedeha (d), and Dmitry ‘Deiron’ Galkin (b, bv). Both tracks, Severed To Pieces and Symbol Of Salvation, bring a modern yet, at the same time, rather timeless form of universal Tech-Death, but I don’t want to refer to the progressive current. With ‘tech’ I’d rather take the ‘historical’ riffing à la VoiVod or Coroner in mind. Anyway, this stuff is fast, energetic, power-driven and uncompromising, with a subtle edge of grinding nastiness. If this is the omen for an upcoming full length, I am sure the whole Death Metal Society will impatiently waiting, because the performance of such great compositional craftsmanship is very tasty!