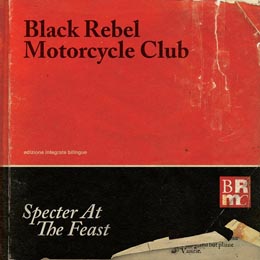 It's been 3 years since this now Los Angeles based Alternative Rock trio's previous studio album Beat The Devil's Tattoo, and there's a good reason for that somewhat longer period of time between releases.

When you'll look up the review I did of BTDT (posted 17/05/2010 and at your disposition in this website's “Archive” section) you'll find I ended it with the announcement of the band's then upcoming appearance at Belgium's Pukkelpop festival. Well now, that event got a tragic aftertaste for the band, as it is where the band's bassist Robert Levon Been's father (and the band's studio producer and live sound technician) Michael suffered a fatal heart attack after the band's show. The man was also an important mentor to the other band members, and therefore his passing was sorely felt. But the fans have not really had reason to complain, as in November 2010 the band released its second DVD Live In London., through its own website and HMV stores in the UK. Recorded earlier that same year at the sold-out London Forum on April 23, it still features Michael Been's mixing. The soundtrack was eventually released on CD through Cobraside, on March 29, 2011.

Halting all live activities, BRMC started work on this, their 7th studio album, in 2011, and eventually recorded the material producing it on their own, interrupting recording sessions to go on a South American tour, as well as playing its first shows in South Africa and China. In December of last year the band did an extremely successful 3-day tour in California, which got sold out with fans coming to see the band from as far as China, eager to see the band perform after such a long period of seeming inactivity. Stylistically, the new album is a véry Shoegazer-geared affair (but with different intensities, so there IS variety, see!?), and that shouldn't be so surprising, as the band used the album as a means to vent their mourning for their mentor. The band not only made the first single off the album (a cover of The Call's 1989 hit song “Let The Day Begin”) available for free download through their website, but did the same for the ensuing Let The Day Begin EP (title song coupled to album track “Returning”), making it also available for streaming. Furthermore, they released a six-part promotional short film documenting the making of the album.

If you never dealt with this band, know that they àre hugely popular, especially in the UK where the first 3 albums got Gold and Silver certifications. So far, the new album went to #35 in the American Billboard charts. In the UK, it went to #31, and Top 100 notations came in Austria (#39), Belgium (#54), Switzerland (#32), Denmark (#27), Germany (#62), France (#89), Ireland (#67) and Holland (#55). A fitting reward for a worthy album, indeed. To get acquainted with the new music, consult the band's own website. For older material, check (www.) myspace.com/blackrebelmotorcycleclub. Oh, and by the way, the band will be touring Europe soon, also playing at Rock Werchter this upcoming July 4!