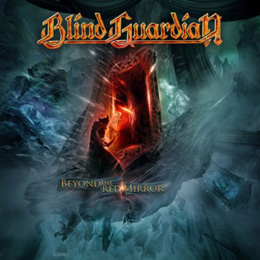 Formed in the mid eighties in Krefeld, Germany, Blind Guardian continue releasing some very fine albums.  They started under another name however, calling themselves Lucifer’s Heritage at first, changing their name to Blind Guardian shortly after signing their first record deal with No Remorse Records.

Of the original members that started the band, two still form part of the line-up, Hansi Kürsch on vocals, and André Olbrich on guitarts, but you could call Marcus Siepen the second guitarist, as an almost original band member, since he joined them in 1987.  What’s rather peculiar about this band is that they have no fixed bass player, instead ‘hiring in’ the help of session players, although it’s a long time rent if you ask me, since Olivier Holzwarth did this job for 13 years, before becoming a member of Rhapsody Of Fire.

And now more about this new album.  To start with it’s a concept album, you could say that this album is some sort of continuation on their 1995 album ‘Imaginations From The Other Side’.  It is a very epic album, like you expect from Blind Guardian. I would call it Wagner but in a metal version.  Most songs are rather lengthy, the shortest song clocking of at just over 3 minutes.

If you like your metal big, bombastic and epic, with lots of different interwoven melodies this album is an absolute must buy !