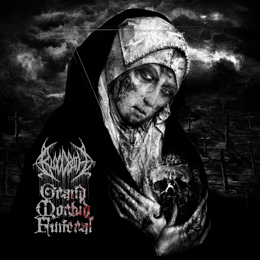 Bloodbath is founded in 1998, with a shared fascination for horror and death metal. Since the release of their first EP, Breeding Death in 2000, Bloodbath is a real pioneer in extreme (death) metal music. Grand Morbid funeral is (again) recorded at the Ghost Ward Studio and The City of Glass Studio in Stockholm.  Mix for the account of David Costillo.

This Swedish death metal monster’s fourth studio album definitely hit a bull’s eye with its new leadsinger Nick Holmes (Paradise Lost). He is, in my humble opinion, an outstanding substitute for Mikael Akerfeldt. The guest contributions of Chris Reifert and Eric Cutler (Autopsy), and the completely new sound of Akerfeldt, make this album a real must-have for every real death metal addict! No doubt whatsoever!

The first song of this album, ‘Let the Stillborn come to me‘, immediately kicks ass ! The somewhat ‘calm’ pieces, just give you some time to catch a breath in between the very loud and very fast guitar and drum sets…. J

It would be a complete mystery to me if that one doesn't create a huge moshpit !

My personal favourites though, are Anne, Famine of God's Word and Mental Abortion. To me, these are a perfect balance between the great voice of Mr Holmes (wow !) and the dark and sinister guitar-drum parts.