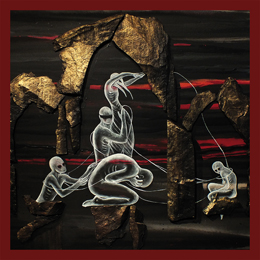 Two years ago I reviewed a split called Triunity with bands / projects from Ukraine, Russia and Belarus (via Casus Belli Musica), but that has nothing to do with this split-release, which is a French co-operation.

Triunity starts with three compositions by Blut Aus Nord, who are on Debemur Morti for quite some time now. This solo-outfit of Vindsval (although he’s assisted this time by a drummer, the famous and hyper-productive Italian Gionata ‘Thorns’ Potenti, and long-time collaborating session bassist GhÖst) belongs to my all-time preferred projects, despite having a very, very, very differentiated approach. Almost every single record, whether it be a full length CD or a 7”EP, is different from any other, but with a couple of comparisons, such as a mostly obscure and occult approach, and excellent craftsmanship. For more information about the history / discography in general, or any of the former releases more specifically, I’d like you to ask, very kindly of course, to read the review on 777 - Cosmosophy (updated on December 30th 2012), 777 - Sect(s) (May 7th 2011, in Archive), or The Mystical Beast Of Rebellion (Archive, February 27th 2011, which includes a very extended biography). Anyway, the material for this split was recorded at Vindsval’s Earthsound Studio (recording, production, mix, engineering and mastering). The three tracks last in between six and seven minutes, and the first time when I was listening to this stuff, I did wonder… …what would it be this time? Actually, it is different once again, but oh so grandiose. Blut Aus Nord’s contribution is based on dense, massive layers of droning Black-Doom Metal, including extremely heavy rhythms, mesmerising leads, floating keyboard lines, hypnotic decelerations, abyssal grunts and a profound Post-Black attitude. The tracks are complex, yet without being exaggerated, and they are energetic, without being blasting. The technical structures go very well with the colossal sound, which can be translated through the eccentric identity Blut Aus Nord stand for. Besides, since these songs combine elements from the past, mixed with, once again, completely newly-invented excerpts, details and structures, this result is a pleasure to enjoy over and over again. I do not think that I am exaggerating if I say that this material is the most asphyxiating Blut Aus Nord-stuff to date?...! 96/100

Second collaborator on Triunity is the project P.H.O.B.O.S., which was formed in 2000 in Paris. Originally P.H.O.B.O.S. were a ‘full’ band, but since quite some time it has become the solo-outfit by original member Frédéric Sacri only. As from the early years, their approach gets characterised by mechanical-industrial sounds, initially heavily inspired by the likes of VoiVod, Godflesh etc. Those influences have never disappeared at all, but the style has turned into an own-faced creativity. For this split, Frédéric took care of production and mix; the mastering was done, once again, by nobody else but James Plotkin (!). The three tracks, all of them lasting for seven minutes, remind me a lot to Diabolos Rising (especially the first album, rather than the weird, crazy second one), yet without the exaggerated extremities. It’s an amalgam of obscure Drone, eerie and haunting Electronics, and ritual, post-apocalyptic Industrial. While the first track, Glowing Phosphoros, is more of the Black Industrial Electro-kind, the likes of Pitch Shifter, Scorn and Godflesh return in Transfixed At Golgotha. And despite my passion for the oldest works of those projects, I might think that this even sounds better than these psycho-grinding protagonists ever did. This stuff comes with almost nothing but superlatives: blackish grunts, hypnotic layers of transcendental aural power, agitative drum loops, and ultra-heavy bass lines of the most majestic kind. With Ahrimanic Impulse Victory, I am totally lost in those eerie, horrific spheres à la Scorn and earlier Godflesh, but once again with that untouchable and undefinable self-identifying approach. 94/100

Finally this. The great layout-artwork has been created by Dehn Sora.