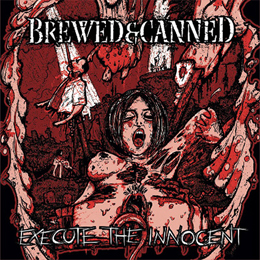 Austria’s Brewed & Canned were formed at the end of last century by two young (at least back then) brothers, Michael (g) and Max (d) Fingernagel. However, they didn’t release anything but some demonstrational stuff; three to be exactly, if I am not mistaken. Very recently, however, and finally, they were able to sign to a professional label, i.e. Germany’s young and small but impressive Death / Black label Blacksmith Records. And a first mutually-achieved result is Brewed & Canned’s debut full length studio record Execute The Innocent, having a total running time of thirty four minutes.

As the title suggest, this album stands for emotional and romantic lullabies… Oops, sorry, my mistake! I mean, as the title suggest, this album is a monstrous and sick piece of Brutal Death Metal. It is of the kind that trespasses national borders (no Swedeath-copying, no USDM-rip off, etc.), but universal Old School nastiness that combines the ugliest elements from Austria evidently, as well as Holland, Germany, Finland, Sweden, the U.S., the U.K., Belgium, and for my sake Djibouti and Equatorial Guinea. The stuff shamelessly flirts with the Grind-scene, yet without being Grindcore. Despite the grind-edged elements, Brewed & Canned stay focused on creating technical and brutal Death eruptions with an almost perverted attitude.

Final word about the production: excellent! Harsh and intense, yet truly completely complementing!