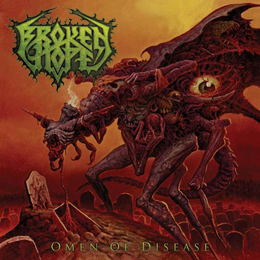 Cripey...another one of America's legendary Death Metal acts has just been revealed to me!

Legendary? Indeed, as the Chicago (Illinois) based band's history goes back all the way to 1988, with a line-up including singer Joe Ptacek, rhythm guitarist Jeremy Wagner, lead guitarist Brian Griffin, and drummer Ryan Stanek. From the get-go, the trademarks of the band would be Joe's low-pitched growls and the guitarists' mid-speed pace. On the strength of its first two 4-tracks demos (1989's Broken Hope and 1990's Demo 2) the band eventually signed a deal with underground label Grind Core Records, who released the full-length debut Swamped In Gore in November 1991, an album which was ahead of its time, s it was the very first Death Metal album to be recorded digitally from start to finish! It looked like a perfect departure for the band from the Underground to the mainstream...but all was not gold that flickered!

By early 1993 the band had separated from its first label, and on the strength of a 2-track demo, simply entitled Demo 1993, got a deal with Martyr Music Group for the release of the August 1993 EP Hobo Stew. Quite swiftly after securing that first deal, the band was approached by Metal Blade Records, who not released the band's sophomore album The Bowels Of Repugnance that same year (a mere month after the EP), but went on to release the band's following albums, 1995's Repulsive Conception and 1997's Loathing (both albums reaching CMJ New Music's monthly Metal Top 25 charts), as well as a re-release of the band's debut album. For its 5th album, 1999's Grotesque Blessings, the band opted for Martyr Music Group again, having been disenchanted by a lack of support from their former label on European soil. Not long after the album's release, rumours of the band's demise came floating through the grapevine. What happened was that there was already some dysfunction within the band (in part brought about by Metal Blade's attitude towards the band in Europe), and that Joe Ptacek had actually left the band. But the band lived on (doing tours in the US ànd Europe), with Ptacek's role taken over by one Scott Creekmore, until somewhere in 2002, when Wagner put the outfit on hibernation, after a decade of constant writing, recording, and touring.

In a 2007 interview, Jeremy Wagner confessed that the former band members, era Loathing, had, for the first time in the years since their split, met face to face, to talk about a possible reunion, and doing a world tour. But at the time personal schedules simply conflicted, and nothing could happen. The possibility of of that reunion happening with that particular line-up was crushed to bits when, on January 20, 2010, Ptacek committed suicide at the age of 37! Broken Hope eventually reformed in 2012 with a line-up comprising original members Jeremy Wagner on guitar and Shaun Glass on bass, and new singer Damian Leski (of Gorgasm fame), to jump onto a North American tour with Obituary, Decrepit Birth, Jungle Rot, and Encrust (the band's current line-up – which may be different from the reformation one – is completed by lead guitarist Chuck Wepfer and drummer Mike Micezek). The band went on to perform at 2013's Extremefest (Germany) and the Maryland Death Fest, gaining critical appraisal which set forth the next chapter in the band's history!

Well, I would say that with Leski at the mike, the band sure has a vocalist continuing the low-pitched growling singing style. I'm not sure how the new lead guitarist's play compares to that of his former colleagues, but I am certain that he's up to par...or Wagner wouldn't have engaged him, for starters. At any rate, what the band delivers as a unit is highly effective and attractive, both somewhat repetitive and melodic, while at the same time being catchy and heavily brutal...and I've loved every one of the § or 7 listening sessions I gave the album from start (wacky intro including the use of synth) to finish! For your audio introduction to the new album (and possibly to the band – I guess even in specialized circles there wil be sóme who haven't come across this band yet), check out the “Music” section at the band's (www.) facebook.com/brokenhope (where you'll find 3 songs posted, one as video). For interview videos and some live footage, check the “Media” section at (www.) brokenhope.com. For a top rating of the album, check below...and my 2013 year-lists!