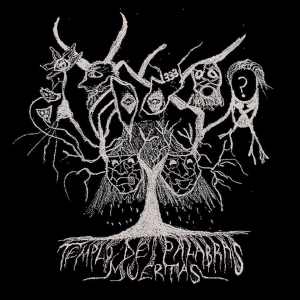 ChaosWolf are a semi-productive outfit by Mexican ‘singer’ Chaoswolf, and known for being a psychic infection, delusional, fighting against all trends within the Black Metal scene. Once again he joined forces with Berserker and Senectus, colleagues in bands like Black Desolation, Divine Dynasty or the great Calvarium Funestus. Templo De Palabras Muertas is the second full length, with material written in between Spring 2013 and late 2014. It consists of eight new tracks and two bonus tracks (amongst which a previously unreleased one), having a total running time of almost fifty minutes, and it gets released by Symbol Of Domination Productions (a sub-division of Russia’s Satanath Records) and Caligo Arcanum Prod from their home country.

The introduction La Escision De Ouroboros reminds me a lot to some symbiosis of (later) Profanum, Valar and Shadowcaster, though Summoning, Vintersemestre and … no, skip it, it’s just a (cool!!!) intro.

Then come three ‘songs’ that make the first capitulo, Fantasma, being / bringing rough, primal and rhythmic Black Metal from the Old School, combining fierce rhythms with traditional melodies, injected by epic structures, grim (sometimes somewhat hysterical) vocals and supported by a raw yet appropriate production. Actually, despite the lack of originality (but then again: why would you, and how should you???), the average quality is quite above ‘expectance’, reminding the listener to the earlier scene – not necessarily the Norwegian one, as one might expect, yet focusing on the essence  in the vein of the scenes from Finland or Germany, I guess. No, I do not guess; it’s quite fitting.

Despite the certain lack or ‘being renewing’ -and then I am talking about the other chapters as well- another question once again comes above: is this sufficient to convince. Well, seen the quality of song writing, performance and sound I am inclinable to bend forward to the positive side, i.e. focusing on the strength of the result rather than the originality if the whole [which, once again, cannot bother undersigned, so why would you, unless you pathetic being is too narrow-minded to [self-censorship…]]. Despite the ‘division’ into several parts (which has rather to do with the poetic-lyrical approach), the whole journey gets based on a same-minded ‘primary’ execution, and in combination with quite a cool performance, conviction of execution and stiff middle finger in the ass sound, this might appeal… well, actually, I think the listener needs to find out itself (once again). ChaosWolf do touch the borders of the blackened extrem(eti)es in a manner the intelligent listener cannot ignore / dislike – despite the primitive, and sound-wise inferior excerpts (!!!). Yet getting rid of those elements, black heads (and Hell no, I am not referring to ¨*…) might, no, they need to pay attention to this kind of sh*t!