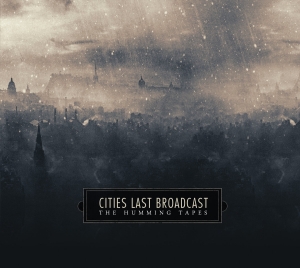 Pär Boström is especially known from the mighty project Kammarheit, with quite some fantastic releases especially on Cyclic Law. Cryo Chamber did release a split with Kammarheit, Apocryphos and Atrium Carceri in 2015, and now this label, run by Atrium Carceri’s Simon Heath, releases the second Cities Last Broadcast album, after 2009’s The Cancelled Earth (which was actually released via Cyclic Law too, by the way).

Cities Last Broadcast is not that productive, but Pär prefers to spend time and energy with quality as result, instead of quantity overpowering craftsmanship. That shows! The Humming Tapes was worth waiting for, as you might notice. Pär did write, record and produce everything himself, but mastering and artwork were done in co-operation, once again, with label owner Simon. The result consists of eight tracks that last in between two and twelve minutes (total running time: about forty-seven minutes).

The short opener Lights Out immediately sets the tone for an adventurous journey through the deepest pits of the human psyche. Somewhat false, dissonant piano chords get accompanied by distant noises and, I think, a haunting sax-alike thing – does not matter, for it works. And then the real raison d’être shows its face, bringing a sometimes creepy, then again semi-ritualistic collage of field recordings (recorded at places like train stations, air ports, bridges, empty factories and tunnels), industrialised and ominous soundscapes, and hypnotic ambient passages. The result is quite oppressive, deserted, depressed and haunting, and unexpected at the same time. With ‘unexpected’, I am referring to the apotheosis, as if the whole album was created to be a mostly morbid soundtrack in order to reach a satisfyingly discomfortable ecstatic sonic (and mental!) orgasm. Each composition tells its own story, being able to keep you, the listener, attentive (though as a background session it does just fine too, especially when trespassing trancelike dimensions). Each time again, the focus on elements like mesmerizing waves of sound, trusted yet uncomfortable noises, and heavy drones, do create an own world within your thoughts. It’s like a mind-play, but you’re able to handle it. Listen to a goosebumps-piece like Glossolalia and accept the emptiness of being, being as part of a hollow community… Listen to Kathédra and fade away into nothingness… Just listen to this album and accept your fate: we’re only individuals in a complex system, dominated by both mechanical and natural powers we cannot cope with…

There is quite some good Dark Ambient / Drone stuff lately (Cryo Chamber, Malignant, earthMANTRA, Cold Spring, Old Europa Café, We Are All Ghosts, Cyclic Law, Old Captain, Raubbau, Consouling Sounds, Frozen Light, Death Carnival Records, Ur Muzik and many more), but Cryo Chamber once again surprise with a top-product by means of Cities Last Broadcast’ The Humming Tapes. Once again a recommendation from this fine label!