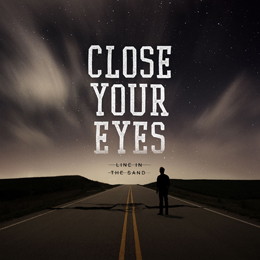 The people at Victory Records really have a nice taste of music, concentrating on bands which are musically special, and somewhat “out-of-the-box”. Originally concentrating on the Hardcore and Punk genres, the guys have meanwhile broadened that palate to include bands from other genres...but at all times, there's still that somewhat special side to the bands, which stems from a will to bring something slightly more progressive.

Abilene (Texas) based Close Your Eyes can be considered a more classical type of Victory bands, tapping musically from Progressively tinted Melodic Hardcore and Pop Punk. The band's origins can be traced back when original singer Shane Raymond met guitarist/ backing singer Brett Callaway at Hardin-Simmons University, the two commenting on each other's t-shirts, the two striking a friendship on a shared love for music, and their Christian faith! Soon after, they recruited bassist/ backing singer Sonny Vega and drummer Tim Friesen and, delving into their faith for the reason of their existence (without preaching), started what would be a very nice career in music indeed. Victory apparently became aware of the band after some time, and signed a deal with the band. As a first result came the band's debut full-length We Will Overcome in 2010, which has sold over 15,000 copies in the US alone thus far, and recently found the video for the song “Song For the Broken” having been viewed over 1,2 million times. Sophomore album Empty Hands And Heavy Heads followed in the fall of 2011. A bit fast after the debut, but the strain of getting songs written in time to match set recording time made the band (which in the meantime added second guitarist Andrew Rodriguez to the line-up, and replaced the drummer for Jordan Hatfield) come together tighter than before.

Following extensive touring (with A Day To Remember and Underoath, as well as being part of the Scream The Prayer Tour package) and performances at several notable festivals (including Cornerstone and Sonshine), which gained the band extra fans wherever they passed through, Raymond was forced to leave the band due to personal reasons, and the band spent some time searching for a frontman whom would not only fit the bill professionally, but also on the personal level (that, of course, including the faith issue). In early 2013 the band announced that person was found in one Sam Ryder, and debuted the new singer at the South By So What festival. Late this summer, the band toured Europe, and barely back home started a US tour in late October. In other words, it'll be some time before you lot out there, who prefer to make your acquaintances with bands through their performances, will be able to witness the band on a European stage again.

Meanwhile however, you might check the band's music anyway, right? I mean, in the “music video” section of the band's own (www.) closeyoureyesmerch.com (don't even bother checking out the band's facebook page for extra music/ videos – this spot tops it all), you'll find a total of no less than 16 (sixteen!) videos, these including the new album's “Frame And Glass” and “The End” (both in two versions, and the latter featuring Zoli as guest vocalist). The first song is a perfect example of the band's more Pop Punk-geared material, the second of their more aggressive Melodic Hardcore leanings (songs on which you'll usually find one of the backing singers doin' growled/ shouted vocals). Not being religious myself, I can nevertheless appreciate the band's messages, as they are not brought in a preaching way. I mean, the main importance is that those lyrics bring a positive message, right? And if among the people listening to this band's songs, some can find solace, or the strength to pull themselves up from the possible misery they live in...the better for it!?